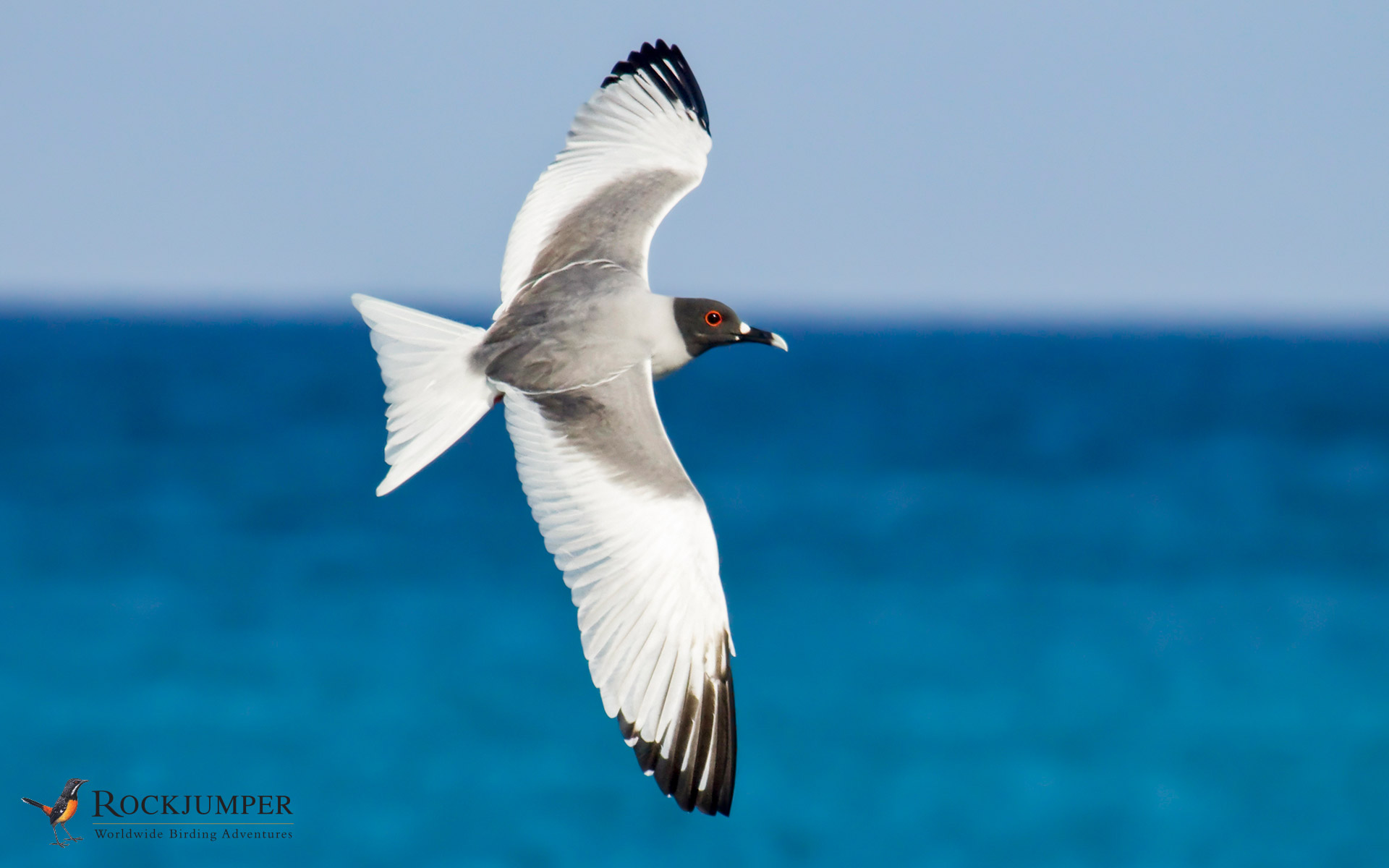 What big eyes you have… “Seagulls” typically do not inspire, even among our birding friends. We think of them on the beach, stealing Cheetos or crying loudly overhead, issuing threats of imminent guano-droppings. But behold, the Swallow-tailed Gull! Large-eyed and alert, it is uniquely contoured with pleasing arcs that satisfy the eye.

Just two species of gulls in the world are known to regularly feed at night, both highly specialized and range-restricted. The Red-legged Kittiwake of Alaska’s Bering Sea and this month’s feature in Rockjumper’s Image of the Month: the dapper, elegant Swallow-tailed Gull. While a few of the latter nest at Isla de la Plata, it is otherwise a Galapagos endemic. It and the rarest gull in the world, the Lava Gull, with an estimated 800 pairs, are the only two gulls breeding on “Las Islas Encantadas”. But, as mentioned, gulls are not for everyone. Thankfully there is a lot of other stuff to find here too, and Rockjumper’s Galapagos cruise offers the best chance to see all the endemics and special places for birders, while also offering a ton for generalists as well.

“There are so many neat places in Galapagos. Active calderas, dense and humid Miconia forests, the arid, cacti-dominated lowlands, down to the superb snorkeling sites. If I have to pick a favorite place it has to be one of the two “bird islands”: Genovesa or Española. The latter probably wins for me, as it is the breeding site of the Critically Endangered Waved Albatross. It’s mind-blowing to see these magnificent creatures up close. Genovesa is also richly filled with breeding seabirds and has a massive colony of storm petrels in the cracks of a lava plateau, which is the playing field for the golden Galapagos Short-eared Owl.”

Forrest Rowland guided the cruise last year, and also loves Genovesa (a.k.a. Tower Island), a spot not visited by most.

“My Favorite site has to be Prince Philip’s Steps, on Genovesa. You have close encounters with the fabulous Wedge-rumped Storm Petrels, as well as near brushes with the local Galapagos Short-eared Owls. It’s fascinating to see these predators in action, snatching storm petrels midair. But my favorite moment was when a mother and calf Pacific Humpback Whale swam right beneath us as we snorkeled. It was absolutely unparalleled for an aquatic nature experience. Unbelievably, the calf surfaced not thirty feet from us!”

“Over the years I’ve been lucky to snorkel with Galapagos Penguins and Flightless Cormorants on several occasions, and watching them underwater is just epic! Once, a cormorant even went after our red flippers – crazy!”

The Bolivar Channel is another hotspot our cruise visits. Here again, many birding itineraries do not see it. The cold water currents here makes it the hot zone for the penguins and the world’s largest cormorant, the endemic Flightless Cormorant, and it is one of the best areas in the archipelago for whales and other marine life, including Whale Shark.

For a birding-oriented visit to the world’s most fabled archipelago, and a cruise that is richly rewarding for friends or family with a more general nature interest, this Galapagos Cruise is unbeatable. Dusan is back this year and guiding in 2021 too, and a few spaces still remain.