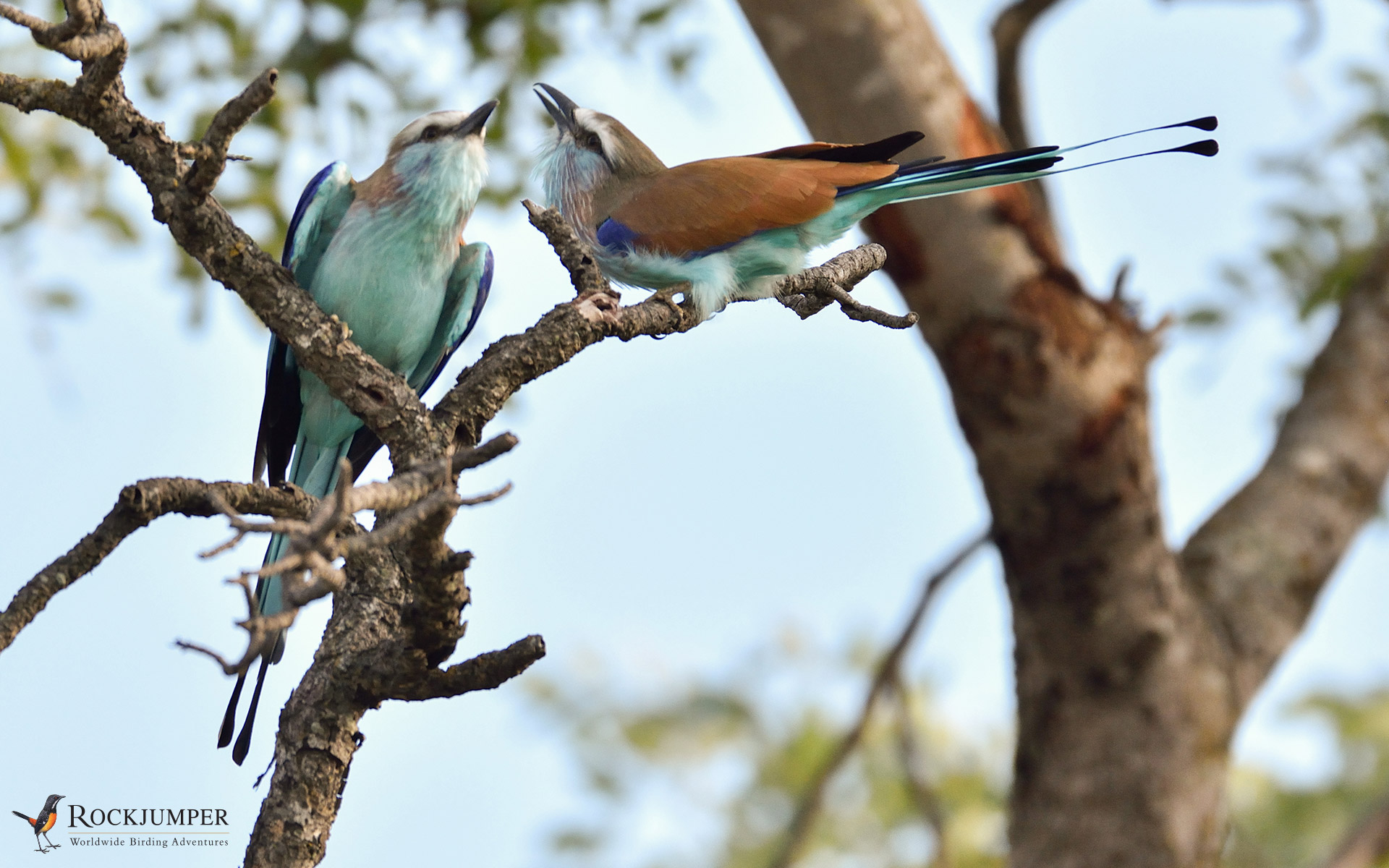 Striking in color and dynamic in the air. Even where common it is always difficult to drive past a roller and not stop. Glowing in hues of cyan and purple and crisply patterned, they post up on exposed perches, taking to the air to dive at unsuspecting prey. Few birds could delight as the roller does.

Entrancing birders wherever they roam, today rollers are found across Eurasia, Africa and Australia. Though fossil records show they once graced North American soil as well. The family Coraciidae is home to 13 species in two genera, including the genus for our featured species, Coracias. Meaning “raven-like”, and so named for its physical attitude and behavior, this was the 10th genus described in avian taxonomy. And how indeed could early scientists have failed to notice such a stunner of a bird?! From their vibrant plumage to their playful calls and pleasing shape, to the rolling flights for which they are named, rollers are beyond captivating. The species featured here, the Racket-tailed Roller, is among the most scarce and sought-after of the bunch, being almost entirely confined to tall broad-leaved woodlands through south-central Africa. Rockjumper’s Namibia, Okavango & Victoria Falls Overland Safari, and our Malawi - Miombo & Montane Birding tours offer the best chances of connecting with this striking species.

From the lily-choked backwaters of the Okavango Panhandle to the ochre-colored dunes of the Namib Desert, the breathtaking Victoria Falls to the game-filled waterholes of Etosha National Park and flamingo-studded lagoons of Walvis Bay, our Overland Safari is an eco-tourism experience like no other. The combination of numerous near-endemic and special birds, charismatic African big game including the fabled “Big 5”, and spectacular and dramatic scenery, ensure that this tour has ranked among our most popular offerings for years now.

Our Malawi itinerary has enjoyed some refurbishment and we are thrilled to have it on offer again. With its scenic plateaus, rolling plains, lakes, rivers, afro-montane forests, and vast Miombo woodlands the birding is simply incredible and we have the opportunity to see many of Africa’s most localized species. Targets include such gems as the striking White-winged Apalis, Thyolo Alethe, Lilian’s Lovebird, Stierling’s Woodpecker, Souza’s Shrike, Montane Widowbird, gorgeous Böhm’s Bee-eater and the austere Pel’s Fishing Owl.

When it comes to birding Sub-Saharan Africa, our offerings and expertise are unparalleled. Join us today in Namibia, Malawi or our home country of South Africa, and you will discover more.

Search for Racket-tailed Roller and much besides on these African adventures: