The land of rugged mountains, rhododendrons, Mt. Everest, sub-tropical jungle and grasslands! Great seas once rolled across what is now Nepal. Fifteen million years later parts of that gigantic sea bed have become the Himalayas – the highest region in the world. Located beneath their southern slopes is the kingdom of Nepal sharing borders in the east, west and south with India and in the north with the Tibeten region of the Peoples Republic of China. At times Nepal has played the role of intermediary between these two great powers and at other times it has faced the threat of invasion. Nepal is a beautiful and diverse land with an amazing variety of wildlife and landscapes. Its cultural and religious mix and intriguing history have conquered the hearts and minds of visitors throughout time.

Our birding tour explores all the key areas of this fascinating, beautiful and changing country. Our tour begins in Kathmandu-Shivapuri National Park, where we find Nepal’s only endemic bird, Spiny Babbler and Hoary-throated Barwing, a near endemic shared only with Bhutan. We spend a few days in the Phulchowki Hills, a popular birding site and excellent introduction to Himalayan Birding with such highlights as Besra, Black Eagle, Mountain Hawk-Eagle, Kalij Pheasant, Rusty-cheeked Scimitar Babbler, White-browed Fulvetta, White-throated Laughingthrush, Grey-headed, Darjeeling and Crimson-breasted Woodpecker, Hill Partridge and Ashy Wood Pigeon.

A visit to Nepal would not be complete without a spot of hiking. We will spend one day of the tour taking a gentle hike from Phedi to Dhampus, a traditional Gurung village. The Gurungs are an ethnic community who inhabit the hills of the Annapurna region. From the village we have an unbroken vista of some of the worlds’ highest mountains; the snowy Annapurna Range, Dhaulagiri and Manaslu. We will also keep our birding list ticking over, with Red-headed Bullfinch, a number of pheasants and even a chance for Scaly Thrush. A visit to the famous Chitwan National Park gives us ample opportunities of finding Tiger and Indian Rhinoceros, while Bengal Florican, Grey-crowned Prinia, Slender-billed Babbler, Rufous-rumped Grassbird and Lesser Adjutant will be sought.

As the tour draws to a close, we head to Hetauda where various rivers and gorges en route may offer up sought after Ibisbill, Wallcreeper, Brown Dipper, and a quartet of possible Forktails covering Little, Spotted, Slaty-backed and Black-backed. Our final birding stop will be at Kosi Tappu Wildlife Reserve that protects riverine grassland on the banks of the Koshi River. With luck we may find the threatened Swamp Francolin, amongst other habitat specialist such as White-tailed Stonechat, Striated Grassbird, Yellow-breasted and Black-faced Buntings, Yellow-bellied Prinia and Black-throated Weaver. Riverside pools may harbour Baillon’s and Ruddy-breasted Crake as well as Cinnamon Bittern. The Kosi Barrage has formed a massive man-made wetland, that hosts the highest concentration of wintering wildfowl in Nepal. We should be able to find the rare Falcated Duck, Black-necked Stork and Bar-headed Goose amongst the commoner species that may include Lesser Adjutant, Black-headed Ibis, Pied and Pallid Harrier, Bronze-winged and Pheasant-tailed Jacana, Ashy-crowned Finch-Lark, Bluethroat, Citrine and White-browed Wagtail and Red Avadavat.

2022 Prices are an estimate, dates are not confirmed and may change. 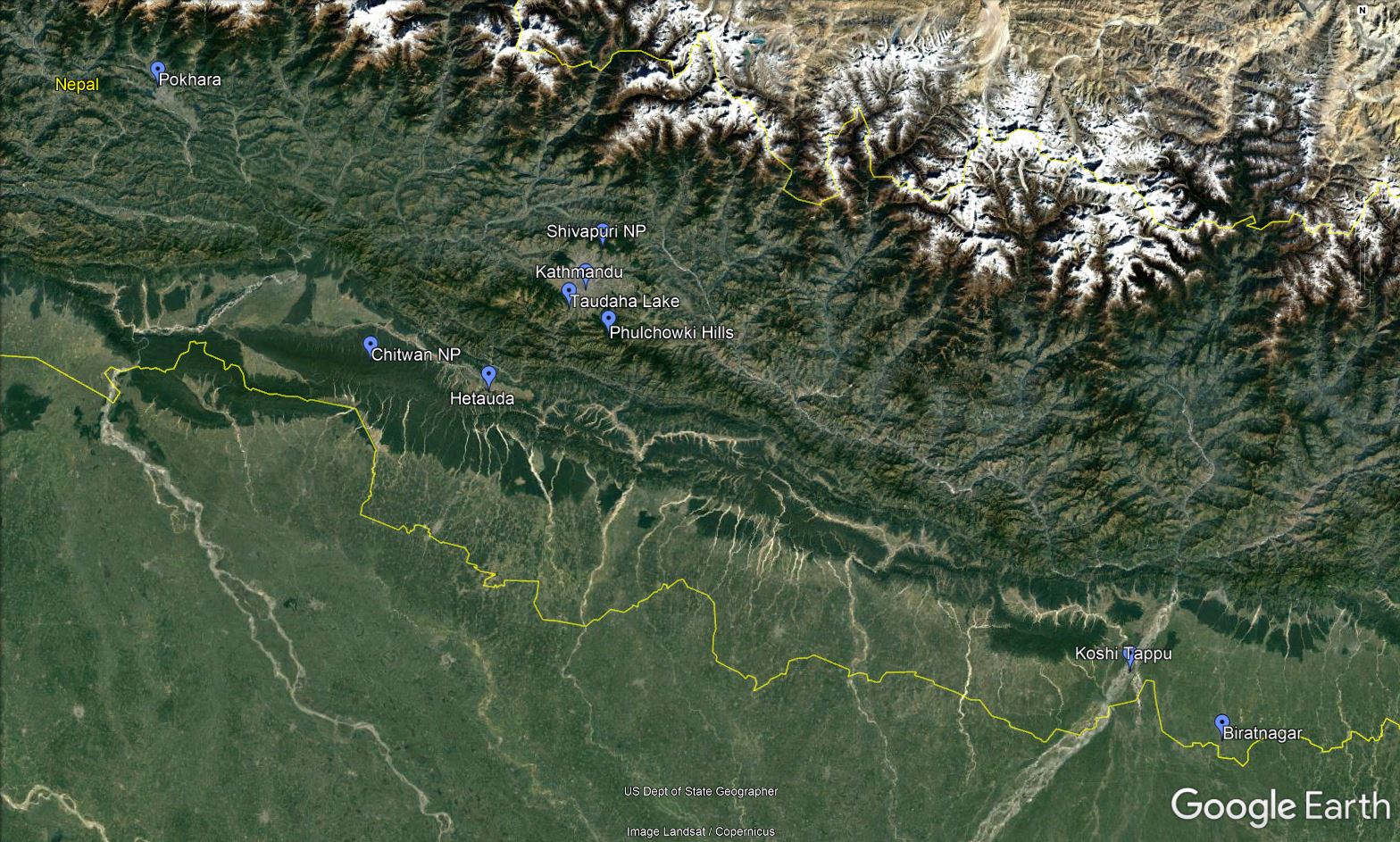 Dennis's knowledge & ability to imitate bird calls is phenomenal. He is also an interesting person to travel with. I enjoyed Eric's humour and felt he handled the group well.

I would recommend Rockjumper to my birding colleagues back in Cape May, New Jersey. Cuan and Rockjumper did an outstanding job in helping us plan our trip.

I had a wonderful time. Our Rockjumper guide, Holly Faithfull, was terrific. She made the cruise, which was already excellent, even better.

Can be linked with: Bhutan - Highlights 2022

Can be linked with: