Spain has long been a very popular birdwatching destination, offering a wide range of Mediterranean habitats along with safe, easy and excellent birding. Many sites are in beautifully scenic settings, featuring Romanesque architecture and ancient, fortified hilltop villages; whilst much of interior Spain that we visit is very rural and way off the tourist trail. Our comprehensive itinerary is specially designed for a great diversity of birds and concentrates on three major and distinct habitats: the semi-arid steppes and cork-oak dehesas (a type of wooded pastureland) of the central and northern interior, the scenic Sierras and high, alpine Pyrenees to the north in Catalonia, and the wetlands and marshes of Doñana National Park on the Atlantic coast. During spring, the area’s many resident and breeding birds are joined by migrants en route from Africa to their northern nesting areas, and some of the fabulous species we hope to see include Spanish Imperial Eagle (up to 23 raptor species are possible!), Great and Little Bustards, Pin-tailed and Black-bellied Sandgrouse, Spectacled Warbler, Alpine Accentor, both species of noisy Chough, White-throated Dipper and the fabulous Wallcreeper. Our journey begins in the southern city of Seville, travels through the steppes and heartland of Spain with stops in the Sierra de Gredos before reaching the mighty Pyrenees, and then continues east to the historic city of Barcelona. We travel in spacious and comfortable vehicles, the food is delicious and plentiful; while our accommodations are mostly family-run establishments in pleasant and beautifully renovated ancient stone farmhouses, nestled in quiet and charming villages. 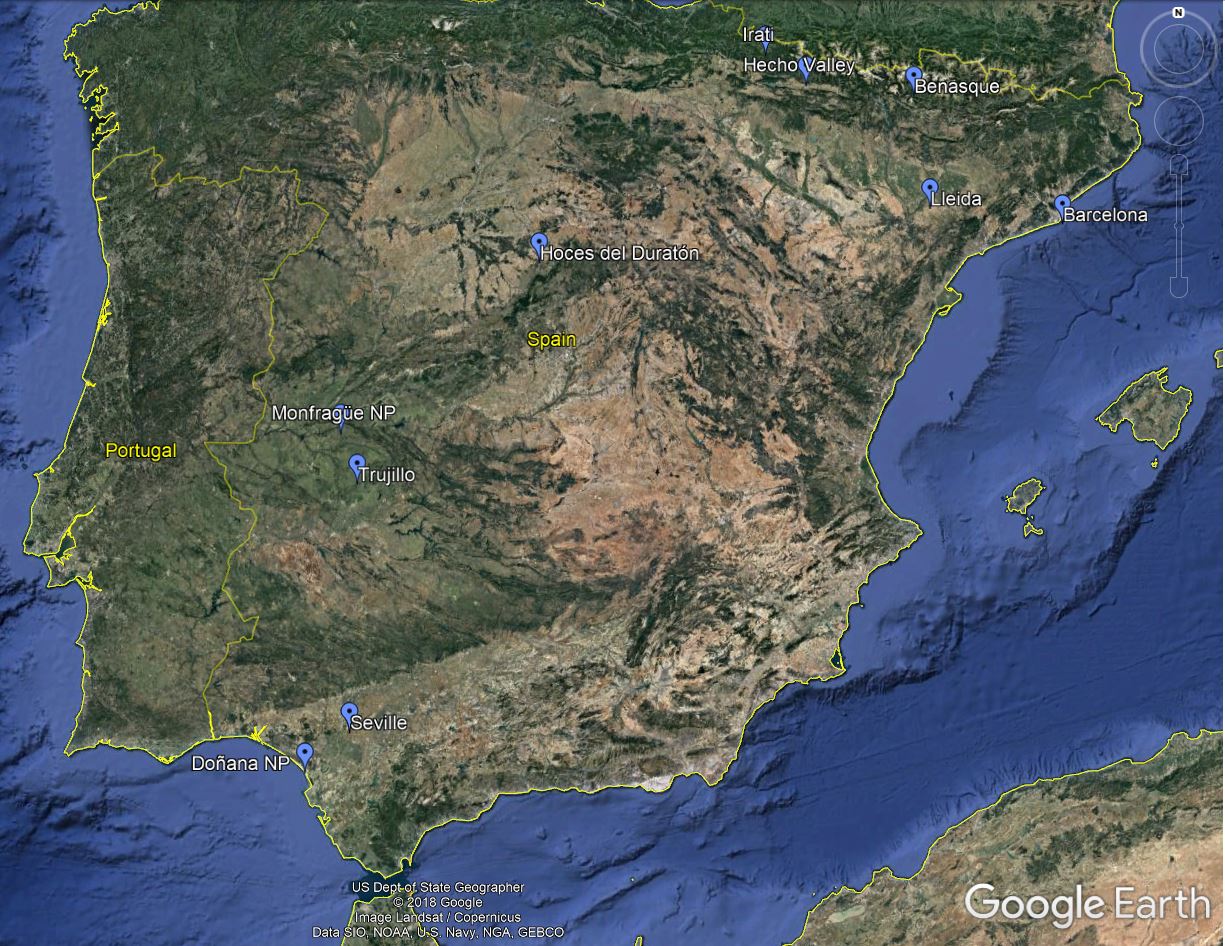 Rob Williams was a fantastic guide -- "Everything's under control!" He is absolutely superb at bird identification. Rob has a great sense of humor, and a wonderful relationship with the innkeepers and vendors along our way. Yeray Seminario, our guide on the Gibraltar Extension, is a treasure! He is soft-spoken, easy-going, approachable, and incredibly knowledgeable about birds. I was delighted to learn that he is an eBird moderator for Spain. He directed us to several great restaurants in the Tarifa area. Alberto Bueno is a sweetheart! He is so classically Spanish and so passionate about the birds. Except for myself (!), I think he was the most enthusiastic about EVERY bird we saw. He is a delightful guide -- compassionate, generous and fun. He and Rob made an unbeatable team and got along seamlessly. We saw well over 250 species of birds, enjoyed fantastic scenery, food and wine! It was a very good trip, and my thanks go to Rob, Yeray and Alberto for all their hard work.

Everything was very good. We certainly tried for everything. Great that we had the time to look at reptiles, frogs, etc. I certainly got almost all my major targets.

We had a wonderful tour in Spain. It was so nice that our guide, Rob, could speak Spanish. We saw many more species and lifers than we expected to. We would love to do another trip with him.

Guides Rob Williams & Alberto Bueno were professional, diligent and hardworking throughout the tour, maintaining their sense of humour and pleasant demeanour to the end; their respective birding competence was impeccable and, more importantly, they functioned as a team without issue or conflict, complimenting each other in a manner which quite enhanced the trip.

I enjoyed the tour and was especially pleased with our tour leader, Rob Williams, and both local guides, who were excellent and very adept at finding our target birds as well as managing all the logistics required by a trip of this nature. This was my first Rockjumper birding tour and the tour exceeded my expectations.