After being isolated from the birding and travelling world for so long, Vietnam has become one of the key destinations on the world birding travel map. Our series of tours take in all the essential sites, giving us an excellent chance of locating all of Vietnams’ viable endemic and near endemic species.

Our main tour departs from Hue, covering another large variety of unique habitats in central Vietnam from the dry woodlands of Yok Don and the lush montane forests of Mang Den to the scrubby, secondary forest of Lo Xo Pass. These birding hotspots afford us the chance of seeing some of Vietnam’s most seldom-encountered avian specialties that include the near-mythical Chestnut-eared Laughingthrush, recently discovered Black-crowned Barwing, as well as localized endemics and global rarities such as Yellow-billed Nuthatch, Short-tailed Scimitar Babbler, White-winged Magpie and Mekong Wagtail.

A scenic drive from Yok Don will take us to Da Lat, a former French hill station at the southern extreme of the Central Highlands. From Da Lat we will make day trips to the nearby Mount Lang Bian, the Ta Nung Valley and Ho Tuyen Lam for Collared Laughingthrush, Grey-crowned Bushtit, Vietnamese Cutia, Vietnamese Greenfinch and Black-crowned Fulvetta, as well as the once mythical Grey-crowned Crocias, a species thought to have been extinct for over 50 years! Di Linh offers up some mouth-watering specialities including Black-hooded, White-cheeked and Orange-breasted Laughingthrushes as well as the near-endemic Black-crowned Parrotbill.

We finish our tour in the magnificent lowland tropical forests of Cat Tien National Park. Numerous specialities, both avian and mammalian occur here, and we hope to find Blue-rumped and Bar-bellied Pittas, Germain’s Peacock-Pheasant, Green Peafowl, the elusive Orange-necked Partridge, Great Slaty, Pale-headed and Black-and-buff Woodpeckers, Lesser Adjutant and Grey-faced Tit-Babbler. Significant mammals could include Leopard Cat, Lesser Oriental Chevrotain, Gaur and three beautiful primates, Black-shanked Douc Langur, Silvered Lutung and Northern Yellow-cheeked Crested Gibbon. Now that peace reigns over the once troubled land of Vietnam, we invite those with a taste for the exotic to explore this incredible country. 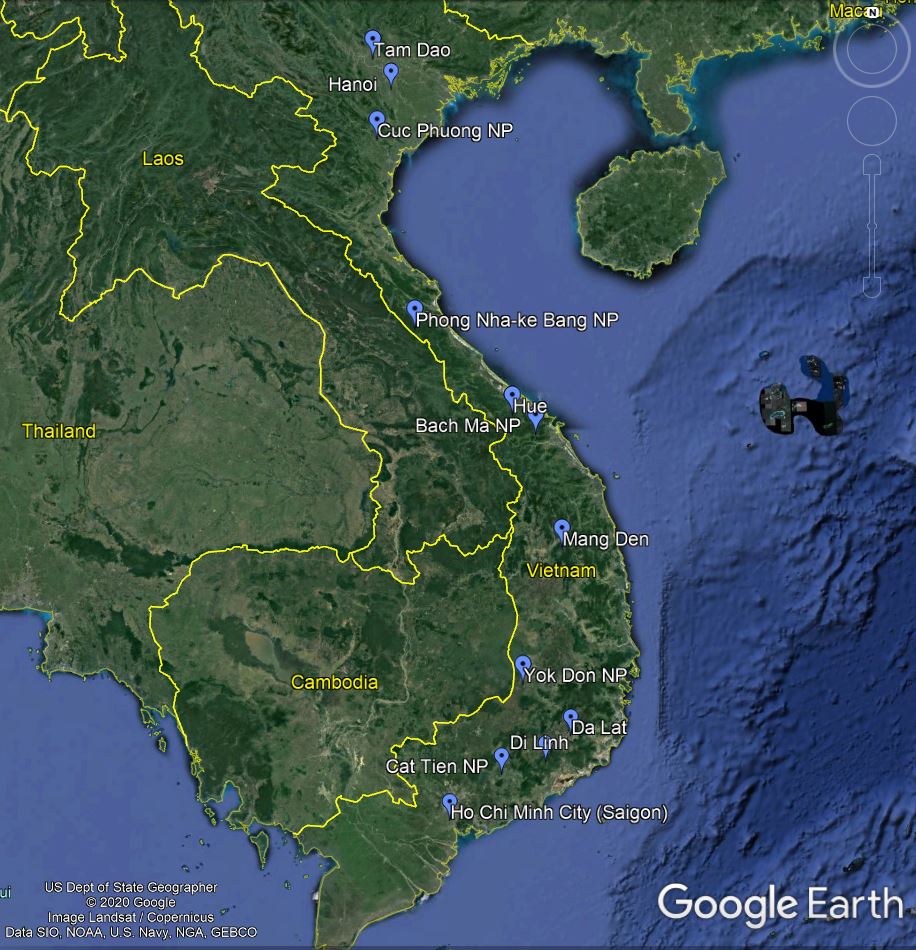 Overall a very good tour. Excellent group and of course, Glen Valentine was brillant and our in country local guide was both a valuable addition and an entertaining and delightful companion.

Can be linked with: Vietnam - Northern Extension 2023