Known in birding circles, simply as the ‘WPO’, this expedition incorporates many of the key birding areas in the South West Pacific. First offered in 2007, it is now considered one of the ‘must do’ expeditions for any birder because of opportunities to see some of the rarest pelagic seabirds in the world plus many island endemics. But it is not only for ‘birders’. The cetacean list can only be described as outstanding and if you ever tire of birding or cetacean watching then there are numerous snorkelling, swimming and relaxing opportunities.

After departing the Port of Tauranga, in New Zealand we sail for the rich waters of the Hauraki Gulf where there are numerous endemic species, including the recently discovered New Zealand Storm Petrel. From there it’s northward to Norfolk Island for a day. Next stop is New Caledonia where we search for the amazing Kagu and other endemics in the Rivière Bleue National Park.

We then spend five exciting days in the Solomon Islands birding on Rennell, Makira, Guadalcanal (Mt Austin), Santa Isabel and Kolombangara, before cruising across the New Britain Trench, an area known to be extremely rich in cetaceans. As we sail along the coasts of Bougainville and New Ireland, we will look for two extremely poorly known seabirds, Heinroth’s Shearwater and the recently rediscovered Beck’s Petrel, both of which we have seen on almost all our previous expeditions in this region.

Next stop is Truk Island (Federated States of Micronesia) for some more intensive birding before we set a course for the Bonin Islands south of Japan. Our route will take us to Chichi-jima, Haha-jima and Torishima Islands (and hopefully Short-tailed Albatross) before we visit Miyake-jima, where we will look for the last specialities of the expedition. Our voyage will then conclude at the Port of Yokohama in Japan.

This expedition is accompanied by some of the best pelagic birding guides in the world who have extensive experience of the seabirds of the West Pacific and have visited the islands we will be landing on multiple times before. Birding starts at dawn and finishes at sundown. Our guides are there throughout the day to assist you and the ‘reading of the bird list’ each evening is legendary for its detail and discussion. This is one expedition you can’t afford to miss.

These prices are subject to foreign exchange fluctuations. 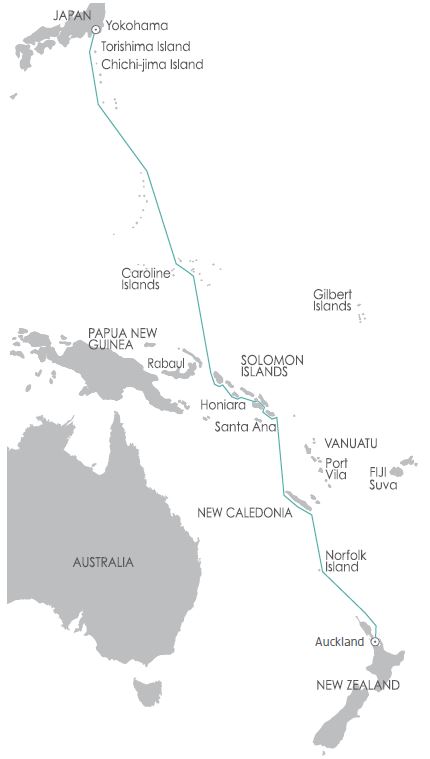 Erik was a delight to be with, as his sense of humour was a constant. Having him at the helm added an unexpected and pleasurable dimension to the whole trip. The entire trip was terrific: beautiful scenery, nice people, good beer and food, and comfy accommodations.

We thoroughly enjoyed this trip. Erik Forsyth is an excellent guide. He managed a one-man show as bird guide, van driver and ground agent all the while maintaining a wonderful sense of humor.

Erik Forsyth is a brilliant  tour leader and birder;  I would definitely like to travel with him again in the future!

The trip sounded good in the write-up but far exceeded our expectations. The pelagic trips were outstanding. The number of participants was perfect. Erik knew the birds and their calls/sounds and was very effective in getting everyone to see the birds. He called many pelagic IDs well before other people had even spotted the birds. Erik’s skills in managing the participants showed and his sense of humour added to his effectiveness. We thoroughly enjoyed our trip.

Erik Forsyth is one of the best guides. Extraordinary knowledge of birds as well as New Zealand itself. Personable and cheerful with a wonderful sense of humour. He is attentive birders' needs and made every effort to meet and exceed any special needs. He knew where to try and find the endemics, and the only one we didn't see or hear was because of inclement weather. We would definitely travel with Erik again should that opportunity present itself.