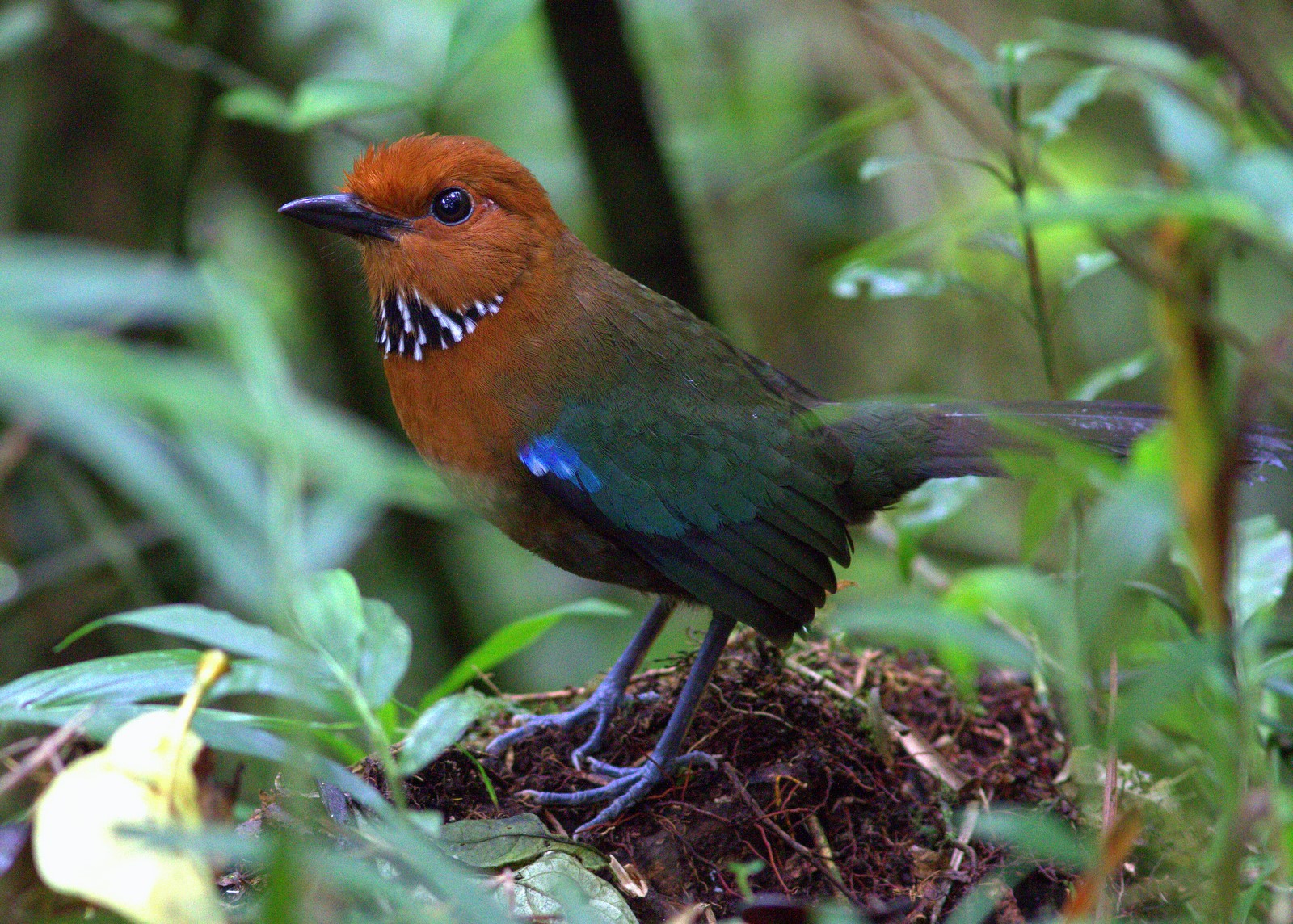 Every year our Rockjumper birding tour leaders are fortunate enough to spend months birding the world’s prime bird destinations in over 70 countries. In the process, they observe thousands of bird species and obtain some superb images! We’d like to take this opportunity to share our leaders’ bird highlights of 2011 with you…….

Cuan Rush
After scouring the Eastern Rainforests of Madagascar in search of the elusive Rufous-headed Ground Roller, we only managed brief and unsatisfying views of a few birds. On our final afternoon at Ranomafana National Park (and our last chance for the bird), we stopped to locate a vociferous Brown Emutail. The little skulker responded well to our coaxing and popped up for a few seconds, showing well before, out of nowhere, a totally unexpected Rufous-headed Ground Roller flashed in and sat in the open on a fallen log for all to see! Unpredictability at its finest, and very rewarding indeed! Keith Valentine
Owls have always been one of my favourite bird families and Africa has a number of rare and elusive owl species that are seldom seen. On past tours to Cameroon, I had come extremely close to finding the rare Vermiculated Fishing Owl without success. This was naturally a much-desired species and had been my most wanted African bird since April 2006! This year I was fortunate to finally get stunning views of this owl in the depths of Korup National Park, Cameroon. Marius Coetzee
On a recent birding tour to Ghana, my major quest was the highly sought-after White-necked (Yellow-headed) Rockfowl. It was an extremely hot and humid afternoon in the Bonkro rainforest when Adam Riley and I arrived at the Rockfowl cave with great anticipation. After almost an hour of waiting, a single bird finally appeared, completely nonchalant at our presence. We watched in awe as this prehistoric looking bird preened itself just meters away from us. Shortly thereafter, another 6 birds arrived. Without a doubt my birding highlight for 2011 – and quite possibly even my birding career! Erik Forsyth
As I focused hastily through the scope, the Long-billed Thrush was foraging in dense leaf-litter on a muddy slope, its oversized bill tossing leaves aside with abandon. It fed undisturbed only a few meters away from an excited group of admirers. I could not have asked for a better look and was totally absorbed and exhilarated; a much-wanted bird sighting fulfilled at last! The Long-billed Thrush is a scarce migrant that winters in the foothills of the Himalayas. Having been to the area several times, this bird had managed to elude me until now. Forrest Rowland
The Gold-ringed Tanager is a localized Colombian endemic and was once named the most sought-after of the “Guerrilla Tanagers” by Hilty and other ornithologists working in Colombia during the 1960’s and 1970’s. The ability to now access this beautiful species within protected conservation areas of western Colombia illustrates not only recent commitments by a country to improve its world conservation status, but also the influence that birders can have on the birds they seek. This bird was the highlight of my most recent Colombia tour. Dave Shackelford
Cabot’s Tragopan, one of Asia’s most impressively decorated and localized pheasants, was my top bird of the year. It was a thrilling trek with my group into the remote wilderness of China’s Wuyishan Mountain Range searching for this prized avian specialty. Adding to the excitement, this was also my 8,000th bird species of the world, making the experience the perfect sighting to celebrate together during a Rockjumper tour. Rainer Summers
The hilly kingdom of Bhutan is covered in rich forests that blanket the steep foothills of the mighty Himalayas. Undoubtedly one of the most spectacular birds that inhabit these forests is the incredible Satyr Tragopan, and this was certainly my top bird of the year. After hearing a male’s evocative call in misty, conifer-covered mountains, some careful searching resulted in a spectacular sighting of a handsome male. The intense colours and unexpected size of the bird, combined with the mystical setting, make this my avian highlight of the year! Adam Riley
I must admit I’m a sucker for big, colorful, showy birds and although New Guinea rightly claims the prize in this category, I haven’t had the privilege of journeying to that magical island this year, so for my bird of the year, I have chosen Cock-of-the-rock. I was fortunate enough to enjoy both remarkable species of these bizarre and truly over-the-top giant cotingas this year and I honestly couldn’t choose which was the better one, so I have taken the liberty of bending the rules and choosing them both – can you blame me? I photographed this Guianan Cock-of-the-rock at a lek site near Surama, deep in the rainforest zone of Guyana, and my incredible experience with Andean Cock-of-the-rocks was at a display lek on the edge of the town of Jardin, in the coffee-belt of Colombia; both are just incredible birds that make the heart soar with joy! PJ Fryer
Namibia is a country of spectacular scenery and landscapes that also offers excellent wildlife and birding opportunities. On a recent tour, we were fortunate to encounter a Rockrunner, previously known as Damara Rockjumper, sitting out in the open with the golden afternoon sunlight bringing out this near-endemic’s beautiful markings and coloration. Combed with the amazing backdrop of the Erongo Mountains, the Rockrunner is my 2011 bird of the year! Glen Valentine
After much deliberating, I eventually settled on Feline Owlet-nightjar, a rare, elusive and attractive endemic, restricted to the lush montane broad-leaved forests in the highlands of Papua New Guinea, as my top bird of 2011. This sought-after species is rarely recorded, let alone seen, and the closest we had come to viewing this nocturnal, forest phantom on previous nights was hearing a few short and soft responses from a bird in the mossy forests near the base of Mt. Hagen. On our final night in the area, we decided to give it one last try and after roughly half an hour of intermittently hearing its subtle insect-like calls and with no expectations of this mythical bird appearing, we were about to call it a night and admit defeat when suddenly the calls sounded much closer than we had heard previously. We, therefore, crept slowly forward, switched on our flashlight and there it was, a show-stopping adult Feline Owlet-nightjar in all its glory – what a spectacular bird! Rich Lindie
My top bird sighting for 2011 would have to be Sub-desert Mesite. It was a year full of highlights and strange encounters, but finding this bizarre bird seemingly frozen to a tree limb while we were walking through the equally weird spiny forest in Madagascar, certainly topped the list. Markus Lilje
After a long slog into the humid rainforest of Korup NP in southern Cameroon, we sat silently at Picathartes Knoll, waiting for a huge storm to abate. With rainwater still flowing through the cave all around us, we had our first glimpses of Grey-necked Rockfowl, which then entertained us royally for the next 45 minutes before we headed back to our campsite. This was a bird I had wanted to see for a long time and to obtain such extensive views on my first attempt was exceptionally fortunate – they even posed for some photos! Dave Hoddinott
During our fantastic September tour through Angola, one of the main targets was one of the world’s least known birds, Braun’s Bushshrike in the northern forests of the country. Amazingly, it only took us a very short while to locate a pair after playback and soon they were in full view and showing off their unbelievably bright orange underparts, while calling and circling nearby us in the secondary forest. Fantastic! At this same site, we also located a group of three Olivebacks which may be a new bird species to science. Jan Pienaar
Owls are one of my favourite bird groups, and Southern Africa has its fair share of these magnificent birds. None, however, are more impressive to me than the Pel’s Fishing Owl, my bird of the year. We found this adult in the company of a grown chick during time spent along the Okavango River in Botswana during Rockjumper’s Namibia, Okavango and Zambia tour.