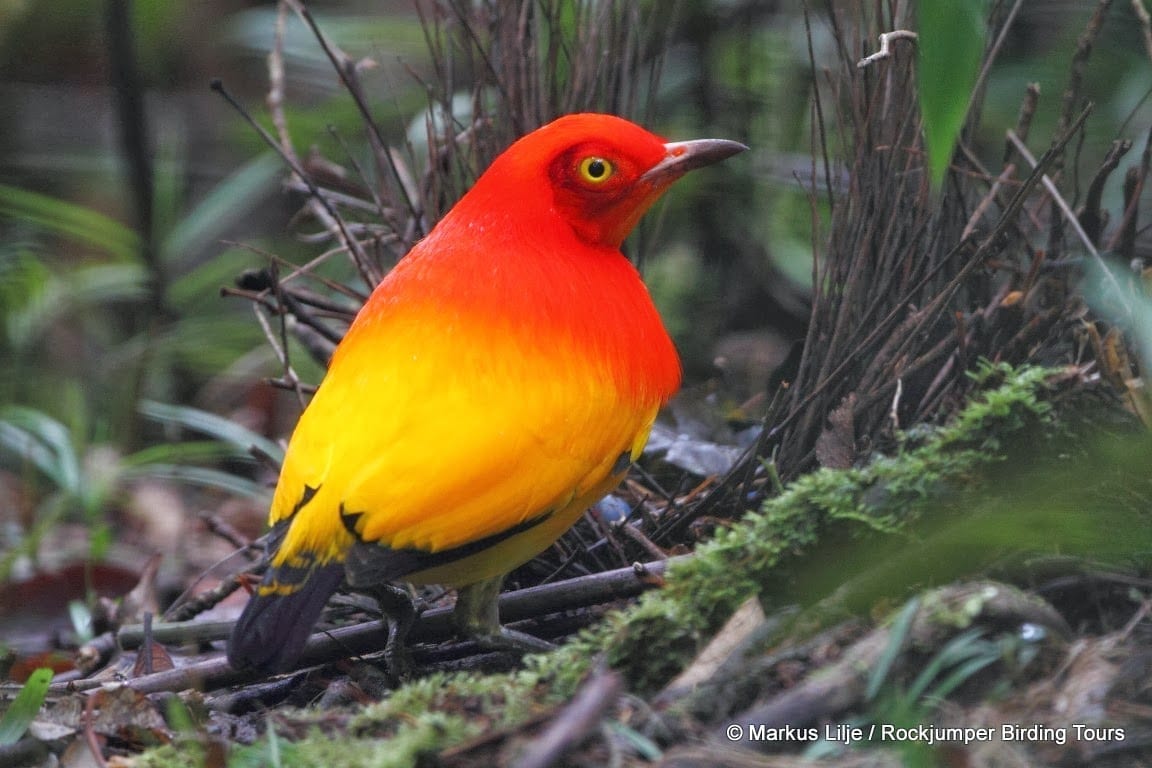 Every year our tour leaders are fortunate to enjoy thousands of birds in a hundred countries across the globe, and we thought we’d take the opportunity to share their top bird highlights for 2013 with you as recorded in their own words.

This year produced the lowest lifer count since I started birding (just cracking 50 lifers compared to an average of 500+ a year for the past 10 years) mostly due to the arrival of my son, William Falcon in April. Hence my birding travel has been curtailed (but life much enriched!). The bulk of my lifers were on a trip to India in October/November, but all the birds were eclipsed by a Snow Leopard we watched hunting and killing a Blue Sheep, so none of them are real contenders for best bird. However, I was invited to take a last minute space on a pelagic birding trip off Durban (near to my home town), in late November and, not being a great sailor, I reluctantly accepted. Not only did I survive unscathed but the trip also produced my undisputed best bird of the year – and a lifer to boot, almost in my own backyard!!! The bird in question is one of the world’s most beautiful, rarest and least known seabirds, Barau’s Petrel. Known to breed only in the mountains of Reunion Island, this Endangered species was only sighted for the first time off the coast of Africa a few years ago, and records of them are few; however we found no less than 6 individuals and I managed to photograph this one in all its glory.

As with every previous entry, I just didn’t know where to begin choosing my ‘bird of the year’ this year. With so many choices, I decided to start with one of my favourite families and that made the choice very simple. The Fulvous Owl has a fairly small distribution and is a great sighting on any tour within its range. Furthermore, I was lucky to see this particular species while leading a tour to Guatemala, also one of my favourite destinations this year!

We were poised in a section of forest where my local guide had seen it before but I can’t say I had high expectations of seeing it on that night, given previous groups’ failures. When the bird in this photograph responded and flew in for a very close look, I was elated to say the least! The colourful todies, trogons and hummingbirds I saw in Cuba and Mexico following that trip were all serious contenders, but I think we all understand the special appeal that owls have…especially the rare ones! 2013 has seen me birding in Peru, Ecuador, Colombia, South Africa, India and Sri Lanka. With a year list of over 2000 species including the spectacular Marvelous Spatuletail, Ibisbill, over 150 species of Hummingbird and a myriad of Antpittas, picking one ‘bird of the year’ is a taxing endeavour. With some degree of uncertainty, I have chosen Lulu’s Tody-Flycatcher – partly because it is just a very cool bird, and partly due to the rather extreme terrain and effort that was required to see it!

Described as recently as 2001, this small tyrant flycatcher can be found at only a handful of high altitude localities in northern Peru. Six hours of lung bursting hiking along the Rio Chido trail was rewarded with a pair of confiding, camera confident individuals. The fact that this bird was seen at a much easier locality the following day did not detract an iota from the original sighting. I was fortunate to lead a fabulous private Ghana Mega tour in December, what a stunning way to end the year! An absolute birding highlight was seeing this magnificent Akun Eagle-Owl. After an extended two evenings searching for this beauty, without success we finally came across this confiding individual at the edge of a town, a most unexpected bonus!

The Akun Eagle-Owl has a rather patchy distribution and can be very difficult to see. It has however recently been found at several sites in Ghana where it is most reliably seen. After many years of searching for this species and enjoying such great views, Akun Eagle-Owl is voted as my bird of the year. I was just a little thrilled to get this photo. My best bird of the year has to be the magnificent Steller’s Sea Eagle I saw about 10 days ago at Lake Furen, Nemuro, Northern Hokkaido, Japan. I had wanted to see this creature for 5 years and I saw an opportunity to travel to Japan (to check out the birding areas) after my Myanmar Tour.

I woke up at 5am at a small lodge (Minishuku Furen) at the edge of Lake Furen. At first light, around 6am a bird was heard calling in a tree near the lake. In the low light I could see the distinct shape of my most wanted bird and as the light increased all the detail could be seen, including the huge orange beak! At 6:30am the bird flew over to the water’s edge and drank. Wow, what a bird!

The Steller’s Sea Eagle is a winter visitor to Northern Hokkaido from Eastern Siberia in Soviet Russia. As the harsh winter weather arrives in Siberia, many birds migrate down to the Kamchatka Peninsula (Siberia), of which about 2000 birds migrate over the Okhotsk Sea into Northern Japan where they spend the winter months feeding on Salmon in the streams and rivers. At the end of winter (March) the birds migrate back to Eastern Siberia to breed at coastal estuaries. Choosing a bird of the year is not as easy as one may think, especially when one is blessed to see so many wonderful birds in a single year. I had some good lifers during the year and some amazing experiences, but the one that stood out the most for me was visiting the incredible and breath-taking Southern Carmine Bee-eater breeding colony on the banks of the Zambezi River, whilst leading a tour to Namibia. Yes, not one of the rarest birds in the world and certainly not uncommon at the right time of the year, as it’s an inter-African migrant to these parts of Africa. But I feel the whole experience of seeing thousands of these gorgeous birds actively building nests, coming in to roost and carrying on with activities that will ensure their continued presence was simply amazing, and the sounds of thousands of calling birds just added to a memorable experience and must go down as my birding highlight of the year. I had my first Australasian birding experience this year, so it would probably stand to reason that my bird of the year would come from this region. There are so many highlights, new families and special experiences to choose from after spending two months in Papua New Guinea, with the Birds-of-paradise alone producing numerous potential winners. However, in the end I would have to go with the aptly-named Flame Bowerbird. After a few sightings of birds in flight in the remote area around Kiunga in the west of the country we had the chance to experience this bird at a bower very near our lodge on one of the tributaries of the Fly River. I was extremely fortunate to get to a small makeshift hide, after lunch, where this bird suddenly appeared in all its glowing glory out of the forest gloom. To experience this incredible species at close range in such a remote area can’t be topped for me in 2013! Having celebrated my first year with Rockjumper in 2013, the year was full of exciting highlights! It was difficult to single out just one bird as the best, but one of the first that came to mind was the fabulous Abyssinian Ground Hornbill. In South Africa I’m used to seeing its southern counterpart, the Southern Ground Hornbill, quite rarely and usually only in large undisturbed wilderness areas. In Ethiopia, however, the Abyssinian Ground Hornbill is quite common and can often be seen striding through agricultural land in a country where wilderness and anthropogenic habitats blur into one. No matter how many times we had seen it before I just couldn’t get enough of this characterful species. The Jambu Fruit Dove of Peninsular Malaysia, Borneo and Sumatra is a gorgeous bird and also a tough species to pin down. It is nomadic and rather uncommon throughout its range. For many years this species has been high on my target list and so I was really chuffed when we found this stunning and rather obliging male at a fruiting tree during the midday heat at Taman Negara in Peninsular Malaysia. There were a lot of potential highlights this year but for me this stunner takes the top spot! 2013 was full of wondrous sights. It ran the gambit from booming Salvin’s Curassows in the heart of upper Amazonian Ecuador, and stunning Lear’s Macaws cruising the martian landscapes of dry Northeast Brazil, to the riot of colour Red-necked and Green-headed Tanagers provide to the lush Atlantic Rainforests. 2013, for me, ended with no fewer than 11 life birds (a boon in South America for me) from remote Mitu, Colombia, home to Chestnut-crested Antbirds, Azure-naped Jays, and gaudy Tawny-tufted Toucanets but my favourite bird of 2013 was the Hooded Visorbearer.

There is little more quintessentially “New World” than hummingbirds and this one is, to me, one of the most iconic. Found only in one remote part of Brazil, amidst towering table-top plateaus, gushing waterfalls, and endemic cerrado, the Hooded Visorbearer requires an unforgettable journey to reach and inspires an immense appreciation of the natural world upon encounter.