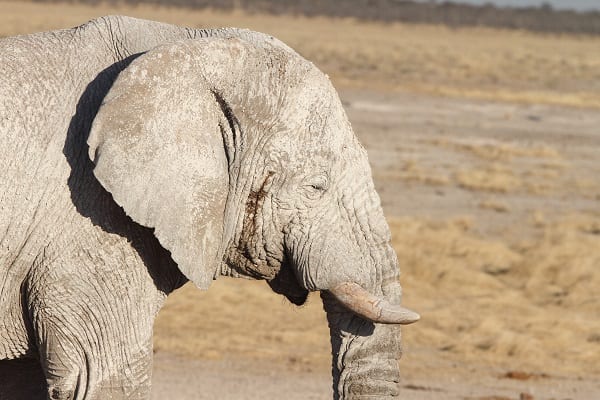 One of Africa’s great reserves is the incredible Etosha National Park in northern Namibia. This vast, arid wilderness of 22,750 square kilometers is centered around the seemingly endless Etosha Pan, a saline depression that irregularly fills with rain water and at these times, attracts millions of flamingoes and other waterbirds (as is the current situation).

Several natural and artificial waterholes scattered through the park quench the thirst of an incredibly varied and large population of grazers and predators. Earlier this month, PJ Fryer and I were guiding a Rockjumper birding and wildlife tour and popped into Nebrownii waterhole, not far from Okaukeujo Camp in western Etosha. On arrival, one of the great white Elephant bulls for which Etosha is famous, was slaking his thirst. These relaxed behemoths are colored white by the pale dust of the pan and their short, broken tusks are typical of this environment that provides little minerals for healthy ivory growth, combined with a very hard soil that damages any excavating tusks.

Suddenly to our right we noticed a Lioness approaching the waterhole and a hundred yards behind her, a stunning, full maned Lion in his prime. As the Lioness approached, she uttered a few low calls and within seconds from the right, three young male Lions and a young Lioness appeared from seemingly nowhere. The males were all teenagers with manes just beginning to sprout and almost certainly all four were the offspring of this pair of adult Lions. One of these boys had lost half his tail and the stub was still raw and bloody. These six magnificent felines half surrounded the huge old bull who paid them scant attention and once his thirst was quenched, he ambled off, the real king of the beasts!

In the distance, we spotted another white Elephant moving in and his seemingly slow, but in reality, rapid pace soon had him at the waterhole. The Lions in the meantime took this opportunity to drink, first the Lioness, followed by the dominant Lion and then the stub-tailed youngster. The newcomer Elephant bull was not as mature as the previous drinker and was a bit nervous to share the waterhole with six Lions, so a few trumpets, ear flaps and stomping had the desired effect of scattering the cats. The male Lion came to rest in the golden grass near us and the Lioness and four youngsters reassembled at the far side of the waterhole. We were enthralled by the drinking Elephant but noticed a Black-backed Jackal merrily trotting into the scene. I explained to the group that Lions detest all other predators and would kill them at any opportunity and that if this jackal ventured too close, his life would be in danger. However, jackals are known for their cunning and intelligence and it’s very seldom that Lions ever get the chance to catch these nimble canids. As I was explaining this, the jackal kept approaching the five Lions and didn’t seem to hesitate. Closer and closer still he came, maybe he had a special relationship with these cats? Not so, in a split second, the Lions sprung into action and it was over in a flash; stubtail had the jackal on its back with the other three young Lions also towering over this careless animal!
The unfortunate jackal didn’t give up easily and we could see him stretch up to nip at any of the Lion’s faces that came near him. However, the jackal had no chance and the massive, powerful paws of these super-predators soon put the scavenger out of his misery.
Stubtail casually picked the dead jackal up in his jaws, but soon lost interest and carelessly dropped the carcass (which within minutes was attended to by a Pied Crow that began by pecking at the puncture wounds on the jackal’s body). The five Lions lay down again alongside the waterhole to survey their surrounds. However, our afternoon’s entertainment wasn’t over yet! A Black Rhinoceros next entered the scene. It’s unusual to see these endangered animals in Etosha during the day; they prefer to visit the waterholes and drink in the cooler evening hours. However, this fellow was obviously thirsty and started making his approach. He was uneasy about the presence of the Lions and backed off for a while. But his needs outweighed his patience and he decided to use his bulk and aggression and he returned with a vengeance for a second attempt at the waterhole. In a cloud of dust, he stormed the resting Lions and had them scattering backwards and forward, hither and thither! The Lions seemed to think it was a game and allowed a reasonably close approach by the furious rhino, but not as close as the jackal had dared! Before long, the rhino had used up his energy and adrenalin without achieving much in chasing the cats away, so he walked off a hundred yards to sulk and wait for the scene to clear.

By this time, the sun had started to slip towards the horizon and we reluctantly had to head back to camp, but what an afternoon of action, Etosha at its very best! To find out more about Rockjumper’s tours to Etosha and elsewhere in Namibia, please visit this link.