ABA Tanzania was a blast, ABA Colombia is up Next! 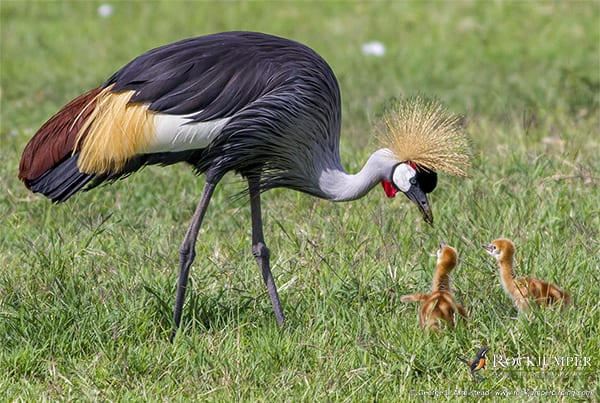 It was quite the party! During the day we were out in groups of 12, and at night all of us gathered for dinner, drinks, and to swap stories about what we’d seen – and on this trip we saw A LOT.

Next up for ABA’s 50th anniversary is ABA Colombia in July 2019.

We’re headed for the world’s birdiest country, and we hope we’ll see you there. But first, we wanted to look back at ABA Tanzania, the phenomenal group of folks we had, and the amazing things we saw. This was our fourth event with the American Birding Association, our biggest yet, and it was a thrill for all involved. There were a couple of “legs” to this trip: we convened on the lush slopes of Mt. Meru, at the safari capital of East Africa – Arusha, Tanzania – and then we were off for Tarangire National Park, followed by the endless plains of the Serengeti, before finishing up in one of the world’s most incredible natural wonders, the Ngorongoro Crater.

Tarangire National Park is synonymous with the Kiswahili word “tembo”, meaning elephant. At certain times of the year, this park hosts the largest concentration of African Elephants on Earth. While this is more of a phenomenon during the dry season, we nonetheless saw dozens (hundreds on occasion) of magnificent African Elephants every day we spent in this fabulous park. Indeed, for many our arrival to the park was greeted with the sight of a herd of over 40 elephants. This was followed shortly by our first Secretarybirds and a Lioness with two cubs! It was an amazing start to our safari.

From Tarangire, we made the long trek west to Serengeti. Crossing the Manyara river valley, up the Ngorongoro Crater escarpment, and down the far side onto the Serengeti Plain, we enjoyed one of the most captivating drives in all of Africa. Intensely scenic, and chock-full of birds and animals, we spent nearly 6 hours on the road, and the time flew by. Serengeti is the Maasai word for “endless plain”, and within its 5,700 mi², one finds protected the Serengeti’s Lions, which number over 3,000 individuals, and nearly 1,000 Leopards estimated to reside here. To top it off, perhaps one of the world’s greatest wildlife spectacles, the Wildebeest migration, makes this place the stuff of legend. Truly an awesome area, at times it was beyond our reckoning, and we had nearly four days to explore this vast destination.

Avian highlights were too numerous to list, with nearly 300 species logged; but standout encounters included run-ins with the endemic Grey-breasted Francolin, Abdim’s and Marabou Storks, Hamerkop, White-headed, Lappet-faced, Hooded, White-backed and Ruppell’s Vultures (including an amazing, grisly scene with dozens of vultures hovering over the corpse of a young Wildebeest that was being defended by a gluttonous Hyaena), Martial Eagles, Dark Chanting Goshawk, 4 species of bustard including Hartlaub’s, two migrant Greater Painted-Snipe (gorgeous pair), stately Grey Kestrel, migrating Amur Falcons, and huge numbers of Lesser Kestrels daily. There was also the most wondrous array of estrildid finches, including Red-cheeked and Blue-capped Cordon-bleus, Common and Black-faced Waxbills, Purple Grenadier, Green-winged Pytilia, Grey-headed Silverbill, and still more. Indeed, there were a dizzying array of cisticolas, though perhaps only Greg really seemed to revel in this. There was the Trilling, Rattling, Wailing, Winding, Singing, Siffling and, of course, the Zitting too.

Those were just the birds. For many of us, the best sightings came a wee bit farther afield, in the grasslands, where for three days straight Lion, Leopard, and Cheetah were seen. Arguably our best Lion and Cheetah encounters came on the spectacular final day when we exited the park. One pride comprising 14 Lions, including 5 adorable cubs being parented by a regal, massive, adult male, were our final Lions in the Serengeti, and were quite the capper. Our last Cheetah were shockingly even more obliging. A family group of 4 appeared, roadside, and proceeded to pose, perfectly, on a termite mound not twenty feet away. It was THE classic Serengeti postcard image!

We saved perhaps the best for last. The Ngorongoro Crater is a focal point of the ecotourism industry; and as chance had it, we practically had the site to ourselves. As much time as we wanted with each sighting, and as much space as we needed for amazing views and photographs. The crater itself is the world’s largest collapsed, intact volcanic caldera. The floor spans just over 100 mi², and is home to more than 30,000 ungulates (hooved mammals), as well as a stable population of Lions, Hyaena, and a few Leopard. Being surrounded by a forested rim soaring some 2,000 feet above the floor of the crater, Ngorongoro is as much a wildlife spectacle as it is one of the most beautiful sites in Africa. The crater rim is a natural barrier around this animal Shangri-La; and heading down into it, one feels transported into another world. Several of you commented how you almost expected to see dinosaurs from the Jurassic roaming about. Meanwhile, the ever-changing sky, with its shifting cloudscape against the crater rim provided a ridiculously eye-catching backdrop. It really was dramatic. Grey Crowned Cranes had adorable fresh, downy hatchlings. The world’s heaviest flying bird, the Kori Bustard, occurs here in surprising density, and we enjoyed close encounters of displaying males. This was the only site visited where Spur-winged Goose was common. However, probably most impressive was the size of the animals: the conditions here produce big animals, including some of the largest elephants anywhere. As we entered the crater, an absolutely enormous “tusker” strode right towards us out of the sun, and then past us into the open plain. We could hear it breathing and sighing as it went. Otherworldly.

Yes, there were Bateleurs, Ostrich, Secretarybirds, Rosy-throated Longclaws, Purple Grenadiers, D’Arnaud’s Barbets, and even a Karamoja Apalis for a lucky few. Indeed, there were a dizzying array of cisticolas, and an incredible myriad of animals, reptiles, and scenery. But best of all was you! Together we enjoyed one of the planet’s most spectacular birding and nature experiences, and in the process we raised critical funds for the American Birding Association and its conservation and community initiatives.

Thanks to all who participated, and to the staff of the ABA for all they do to promote birds, birding and outdoor awareness. Please join us July 20-29, 2019 for ABA Colombia, as we celebrate the ABA’s 50th Anniversary, and seek out Andean Cock-of-the-rock, Toucan Barbet, Golden-headed Quetzal, and more hummingbirds than you can shake a stick at.

Join us today, and discover more.

*If a Tanzania trip like above interests you, please contact us today. Nearly half our business is designing custom tours for small groups of friends and families.