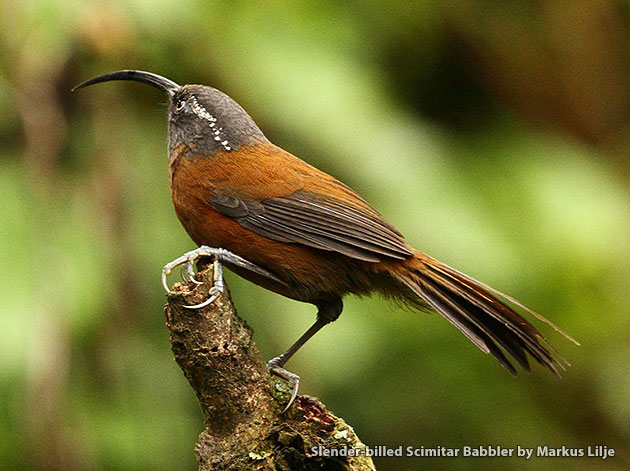 The Buddhist Kingdom of Bhutan has, perhaps surprisingly for such a small country, long been considered as one of the top spots for many world birders to experience the wealth of fauna that this part of our world has to offer. In particular, this country provides a wonderful introduction to Asia and the Indian Subcontinent and manages to combine this with a great cultural and general wilderness experience that can’t be matched by many other destinations. Despite some challenges that the country is now facing with rapid development, it will continue to have the most extensive remaining forests in the Himalayas and be the best place to look for many of the region’s most wanted birds. So then, you are considering heading to Bhutan but are unsure when to go and which one of our Birding the Buddhist Kingdom tours to join? This blog will hopefully help to clarify which tour is best for you in terms of the species that can thereby be expected. (Please note: this applies only to the afore-mentioned tours, and not to our new Budget tour, which runs much earlier in the season.)

Rockjumper offers several tours to Bhutan every year. So what are the differences between them? Here I will help contrast the options and give positive and negative sides to the various months in which they are scheduled to run. I include the extension we do to the Assam state of India in the discussion, but will cover this in more detail during the specific species section.

The reason we visit this part of the world with all its great attractions mainly during the second half of March and into early May, is that this is early spring with most birds being very active and calling as they are either preparing for the breeding season or just starting to breed by the end of this time period.

There are two main groups of birds, whose different behaviors influence what is likely to be recorded on the various tours. The one group consists of the birds that use the Himalayas and surrounding plains as their wintering ground, before they fly north to breed high up in the Tibetan plateau area or beyond in other parts of Eurasia. The second group comprises the birds that spend the northern winter in more tropical parts of Asia and then migrate north to use the Himalayas to stage their breeding attempts in spring. An additional group can be made up comprising the altitudinal migrants that can be seen on both tours, but potentially at widely variable altitudes as they move up as the season becomes warmer.

So then, generally the earliest tour is better for migrant ducks, redstarts and shorebirds, while the later tours gives better chances for some cuckoos and a number of birds that are easier to locate because they are more vocal and predictable as we move into their breeding season.

Now to get to some specific species:

Although Bhutan is not a place birders visit to look for waterbirds, those that are seen are usually more likely to be found on the earlier tour, before they head north. The first tour in Bhutan also has better chances to find Wallcreeper, which moves up to very high altitudes by the end of April. Another similar species is Snow Pigeon, which is still possible on the second tour, although most birds are now out of range. Redstarts, especially White-throated and Hodgson’s, are likely on the first tour too, before they head up and north. Great Cormorant is still around during the first tour, before they breed to the north in Tibet. Northern Goshawk is also still around at this time of year and there is a greater chance to find some of the migrant thrushes. A few of the high-altitude flycatchers are still lower down and can be easier to find. Alpine Accentor, Eurasian Wren and Himalayan Beautiful Rosefinch are other birds that are often too high up by the second tour. Generally this time of year is also more likely to produce vagrants, although this is never something that can be expected of course, but we have found some interesting waterbirds as well as thrushes and other species.

The later tour usually takes place from mid-April (though we have recently added a new tour to commence in the beginning of April) and has a better chance for Chestnut-winged, Indian, Plaintive, Lesser, Hodgson’s Hawk- and Square-tailed Drongo-Cuckoos, for example. Many species are also more vocal at this time of year, sometimes making them easier to find – some examples include Large-billed Leaf Warbler, the shortwings, tesias, Ward’s Trogon, a few laughingthrushes, Broad-billed Warbler and Slender-billed Scimitar Babbler. Some species, like some of the parrotbills, occasionally only reach their high-altitude ranges later when the bamboo gets better and can be hard to locate during the earliest tour, although some of these species are just always really hard to find either way.

During the extension in India, the total number of species recorded during the early and later tours can be a little different, although again most of the birds that are unlikely on a later tour are not usually the species that birders travel to this area for. Gadwall, Garganey, Eurasian Teal, Tufted Duck, Common Shelduck, Northern Pintail, Greylag Goose and Eurasian Wigeon are typical examples. Bar-headed Goose is far more common on the first tour, although it is still sometimes around by the time we get there on the second tour. Daurian Redstart is possible on the earlier tour, while a number of shorebirds including Common and Spotted Redshanks and Temminck’s Stint are around the Kaziranga NP wetlands in larger numbers too, as are Northern and Grey-headed Lapwings. All the harriers are migrants, heading north in April, although Pied Harrier tends to stay around Kaziranga a little longer. If the rains have come early there are a few birds that become possible on the second tour, which include Rain Quail, Bristled Grassbird and a few cuckoo species, while Ruddy Kingfisher can sometimes be heard in Nameri NP.

A huge factor that influences the birding in the Himalayas are the mixed species flocks we are sometimes able to watch moving through the forests. These seem to be encountered more frequently earlier in the year, before the onset of breeding and the birds subsequently settling down in smaller territories. Connecting with many flocks while birding does not guarantee a larger list by any means, but is always a great way of seeing birds and sometimes coming across larger numbers and more opportunities for watching bird behavior as they feed nearby.

It is very important to remember that the seasons can be quite dissimilar in different years, with warmer temperatures hitting the area a few weeks earlier in some years than in others. This will obviously have a potentially big influence as to when some species will still be around and at what time they will move to higher altitudes. In some years birds will start calling later because it may still be colder, while in other years some species start breeding early and will behave in a shyer fashion and stop associating with flocks earlier than would otherwise be the case. Generally the first tour is still quite cold, which you clearly feel during the camping portions of the trip, although on the flip side the temperatures at lower altitudes during the second tour can get quite hot and birding gets quiet during the middle of the day. The flowering season for rhododendrons is fairly long and we generally experience this spectacle on all tours, although this again can be quite different from one season to the next. Magnolia flowers earlier in the season and are best seen on the first tour, although the trees at higher altitudes flower later and can still be seen during our later tours here.

So there really is no obvious or easy answer and it may well depend on what areas have been visited before as there are some species that are more likely on the earlier and some that are easier during the later tours. In the end, as with any birding tour or destination, there is always a smattering of luck required and you may find some great fruiting or flowering trees on one tour and not on the next.

To recap then: Most of the really big targets that the majority of participants want to see on this tour are roughly equally likely on all tours, so I would say the decision would depend on other specific targets for everyone. Ibisbill, all the pheasants, Rufous-necked Hornbill, Himalayan Cutia, the different Wren-Babblers and Beautiful Nuthatch, as well as the great variety of minlas, yuhinas and fulvettas would not be considered easier or trickier on any of the tours. The first tour is better for migrant ducks, shorebirds, redstarts and generally for flocks; the later tours are more likely to deliver a variety of cuckoos, calling laughingthrushes, tesias and provide a marginally better chance for Ward’s Trogon. In addition, some of the other interests can also be taken into account – mammals, cultural and scenic differences are very small, with similar numbers of flowering orchids and other plant species on all tours. It is however slightly more likely to rain on the later tours, which again can assist in providing the occasional sweeping views across the Himalayas. The first tour is colder, but manageably so, while the later tours can have some hot days. The total bird species recorded on the various departures are extremely similar and there is certainly not one of these tours that stands out as the obvious one to choose – whichever way, you can be assured that a spectacular and sometimes overwhelming experience awaits you in this wonderful part of the world!