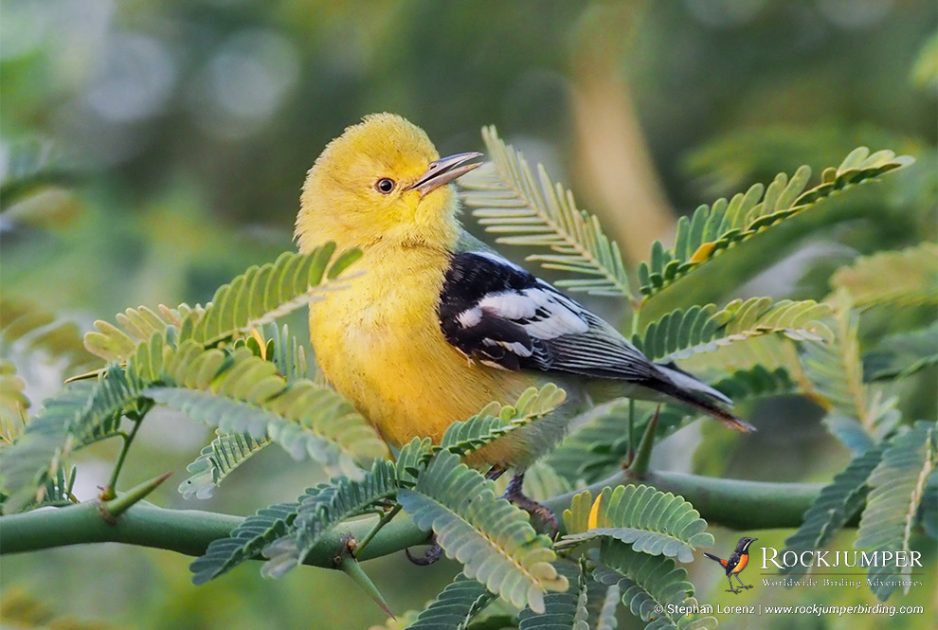 The best time to visit the area is from December to February. While much of the birding areas lie within the Thar Desert, mornings during the winter months are usually cool with warm and clear days, and the southern section of western India is quite warm even during winter. The birding trek across western India also passes through culturally and historically diverse areas, from the Golden Temple in Amritsar to the hilltop fort in Jaisalmer, and visitors have the chance to witness the remote hinterlands of Rajasthan and Gujarat. While the distances are extensive, travel overall is quite easy, and the majority of species are readily found within the right locales. The landscapes throughout western India are vast and starkly beautiful, the birds are plentiful, and the chances for some truly rare species make for an exciting birding destination.

Below is a short summary of some of the top birding sites in western India.

Several fantastic birding sites are located within the vast state of Rajasthan. The wild desert and endless grasslands of western Rajasthan are home to some of the rarest species of the subcontinent. One of the most important sites is the Tal Chappar Reserve, also known as the Black Buck Deer Sanctuary, and its immediate surroundings. The Indian Spotted Creeper’s preferred habitat has been heavily degraded, and the species appears to be thinly distributed, but the Tal Chappar area offers an excellent chance to see this special endemic, as it occurs here within remnant stands of khejri trees. Rufous-fronted Prinia is a near-endemic that is also quite common in the area. Within the Black Buck Sanctuary, the namesake animal of the reserve is quite common, and large groups of this beautiful antelope roam the pristine grassland. The most interesting bird species here is the White-browed Bush Chat. Requiring intact grasslands, it has disappeared from many areas but can still be found here with relative ease. To the west lies the town of Bikaner, which hosts one of the most unusual birding sites anywhere, the Jorbeer Conservation Reserve, also known by a more descriptive name, Jorbeer Carcass Dump. While this location may not be the most aesthetically pleasing, it does harbor an incredible number of raptors, and has essentially become a sanctuary for vultures and migrant eagles. Skies are filled with soaring eagles and vultures, and hundreds more roost on the ground and in scattered trees. The large numbers and close proximity of so many birds of prey is spectacular, and the photographic opportunities are endless. Species that regularly winter here include big congregations of Egyptian and Griffon Vultures, Steppe Eagles, and Black Kites; with smaller numbers of Cinereous and Himalayan Vultures, and Eastern Imperial and Tawny Eagles. Despite all this, the raptors are not the biggest drawcard to this site. Instead, the flocks of Yellow-eyed Pigeons that winter in the surrounding desert and fields are the true specialty, as this species is difficult to find elsewhere. An afternoon here usually turns up good numbers of pigeons as they forage on the ground in nearby fields or commute in flocks between feeding areas. The next stop further south brings with it a more aesthetically pleasing spectacle, cranes! In the remote village of Khichan, residents have been feeding flocks of overwintering Demoiselle Cranes for decades. The birds roost in reservoirs and open fields around the village, and in the early morning leave their resting places in enormous flocks to visit various feeding grounds around the community. No matter where one looks, cranes usually fill the view and offer great photo opportunities.

Desert National Park lies at the heart of the Thar Desert in western Rajasthan, and has become one of India’s most important birding sites in recent years because it harbors one of the last remaining populations of the critically endangered Great Indian Bustard. Once widespread, ranging throughout India’s lowlands and into Pakistan, the large-scale degradation of its grassland habitats have pushed the species into more and more fragmented populations that are barely viable. The largest population remains in Desert National Park, where livestock exclosures have been built in an attempt to save the species. The species’ future remains uncertain, though, with less than 100 individuals available in the park. For the moment, visiting birders still have excellent chances of seeing this magnificent bird as it wanders majestically across the desert landscape, but it is another species that birders should try to see sooner rather than later. Desert National Park also offers the chance to see several other specialties, including Cream-colored Courser, Red-headed Vulture, the Punjab form of Northern Raven, Black-crowned Sparrow-Lark, and locally uncommon Trumpeter Finch. While Desert National Park is dominated by arid grasslands and sand dunes, it is possible to find a different habitat in the nearby Akal Wood Fossil Park, where rocky hills are covered by sparse scrub. An hour or two of birding here should turn up Indian Eagle-Owl, Desert Lark, Red-tailed Wheatear, and Striolated Bunting among more widespread species. Even Sykes’s Nightjar is possible.

The small town of Siana lies in southern Rajasthan, and is surrounded by rugged granite hills, wild scrub forest, and surprisingly productive agricultural fields. The area used to harbor a healthy population of Leopards, one of the major tourist drawcards, but sightings of these magnificent cats have become rare in recent years. Siana remains famous among birders, since it is one of the best places to see the beautiful White-bellied Minivet. This Indian endemic has a relatively large range, but is uncommon at best, and Siana offers excellent chances to see this species. They roam over large areas, so it takes patience and a bit of luck to locate them in their preferred acacia scrub habitat. While searching for the minivet, it is possible to find many of the area’s other specialties, which include Rock Bush Quail, Indian Scops Owl, Indian Vulture, Red-necked Falcon, and Indian Bushlark. The fields and scrub are also excellent for wintering and resident buntings, with Black-headed, White-capped, Striolated, Grey-necked and Red-headed all possible. Not far from Siana lies Mount Abu, an isolated mountain rising to 1,722 meters that forms an island of forest and greenery within the sparsely vegetated lowlands. This popular hill station is easily accessible and harbors many species that are more typical of forested areas to the east and south. The star attraction here is the colorful Green Avadavat, a threatened species that is now only known from a handful of sites throughout India. Fortunately, this endemic Estrilid finch remains common in the Mount Abu area, and small flocks are regularly encountered feeding along field edges and in scrubby areas. A morning here may also turn up a good selection of species that are not found in other parts of western India, including a handful of endemics like Red Spurfowl, Indian Black-lored Tit, and Indian Scimitar Babbler.

Little and Great Rann of Kutch

Gujarat is the westernmost state in India, and contains the massive salt flats and deserts of the Little and Great Rann of Kutch within its borders. Both sites offer spectacular wilderness landscapes, each with a unique set of specialty species and some of the best mammal watching in western India. The Little Rann of Kutch is home to wintering Macqueen’s Bustards, which can often be found along the edges of salt flats where bushes provide some cover. Greater Hoopoe-Larks occur on the most barren stretches, and agricultural fields hold Rufous-tailed Lark. A night drive on the empty flats offers the opportunity to see the cryptic Syke’s Nightjar alongside Indian Nightjars; while Pallid Scops Owls usually do not require an outing at night, since one or two are often staked out on a day roost. Seasonal pans and lakes add an amazing variety of waterbirds to the trip list, including Greater and Lesser Flamingos, Great White and Dalmatian Pelicans, and shorebirds and waterfowl. The Indian Wild Ass Sanctuary not only holds populations of this rare mammal, but also offers some protection to the habitat. Further west lies the Great Rann of Kutch, which has a similar landscape but also offers a more diverse set of habitats. Scrub forest and rocky areas are home to the endemic Painted Sandgrouse, White-naped Tit – one of the world’s most beautiful Parids, and ground-hugging Syke’s Lark; while the near-endemic Marshall’s Iora can also be easily found. Areas dominated by Salvadora persica, locally known as Khari jar trees, often host a small wintering population of Grey Hypocolius, a monotypic family. The extensive grasslands here are home to Spotted Sandgrouse and flocks of Common Cranes. The birding opportunities in Gujarat extend beyond the deserts, with coastal locations offering a chance to see Crab-plover – another monotypic family, and Indian Skimmer – a rare endemic. It is even possible to find wintering Sociable Lapwings while in the agricultural country of eastern Gujarat.

The Harike Wetlands in the state of Punjab represent the largest wetland complex in northern India, and hold a treasure trove of rare and threatened species. The 4,100 ha wetlands were declared a RAMSAR site, acknowledging its importance to conserving several rare species and the high biodiversity, and an extended area of the wetlands was declared a bird sanctuary known as Harike Pattan Bird Sanctuary. The area harbors several range-restricted species, and Harike is one of the best places in the world to see the scindicum subspecies of Jerdon’s Babbler and the distinctive Rufous-vented Grass Babbler. Both species are fairly common in the intact stands of tall elephant grass. Other resident species that are of special interest to visiting birders are the Sind Sparrow, which looks like a smaller version of a House Sparrow, and the White-tailed Stonechat. The former is often found in reeds growing along the canals; while the latter favors grassland along the river. Specialties that occur only as winter visitors from further north include the diminutive White-crowned Penduline-Tit, a few Mountain Chiffchaff among the hordes of Common Chiffchaff, and the uncommon Brook’s Leaf Warbler. All three species can be found in close proximity to each other in the swaths of reed beds, or foraging in the woodlands along the channels. The open lake holds vast flocks of waterfowl, and the majority of regular winter migrants to India can be found here, including Bar-headed Goose, Ferruginous Duck, and Red-crested Pochard. Rice paddies, scrub, and ponds hold an excellent variety of species typical of northern India. A full day of birding the Harike Wetlands in winter will typically yield around 100 species.

*We do not travel to Harike on any of our scheduled tours, but we can offer it as a location on a Tailor-made tour. Contact tailormade@rockjumper.com today to set up your dream tour.

Join us today, as we explore some of India’s less frequented parks and reserves, and take in all that Western India has to offer. What’s more, add to your adventure by visiting Tansa Forest in search of the recently rediscovered Forest Owlet.