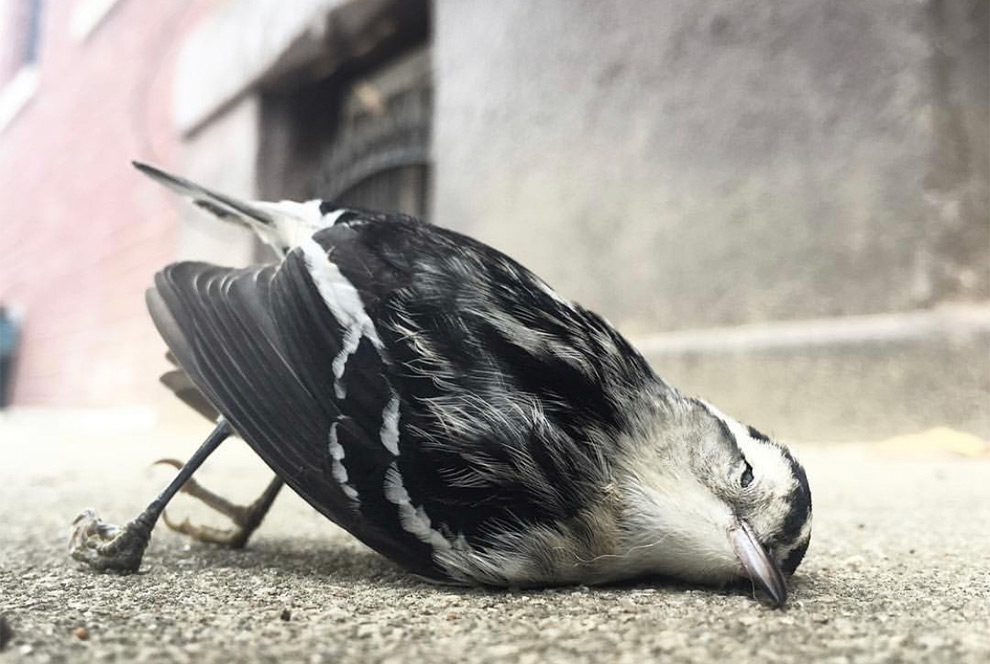 Adding to the window collision statistics

The sound of the thud was unmistakable. A bird had hit our living room window as I was preparing to leave the house one morning. My husband, Greg, went to check out the window collision and came back in with an injured Swainson’s Thrush.

We put the stunned bird into a small box and closed the lid, hoping it would recover. I wished the poor bird well and left for work. Later that morning, Greg texted me saying the bird did not survive. Sadly, we had inadvertently added to a heartbreaking statistic of more than a billion birds killed from window collisions in North America each year. It’s thought to be the biggest source of direct human-caused mortality in wild birds.

Why does this problem exist?

In 2015, the University of Alberta in Canada developed a citizen science project to study bird-window collisions. About 800 people participated in the “Birds and Windows Project,” which used active participation to identify the factors that affect collision risk at residential homes across Canada and the United States. The study suggested residential homes represent 90 percent of building-related bird mortality, due to their large number compared to other types of buildings, and that migratory songbirds are the main victims. Most birds are killed instantly, but many others are taken by predators while they are still too stunned to react.

It may seem odd that a bird would fly into an obvious obstacle such as a window. However, the Cornell Lab of Ornithology says birds don’t see the same way we do. In order to easily spot predators, a bird’s eyes are on the side of its head, giving it a much wider angle of vision than humans have. While this design is great for spotting danger approaching from the side, it makes it difficult for a bird to focus on what is directly in front of it. Birds also have no understanding of reflection because they evolved in a world without glass. They are simply unable to distinguish trees and sky reflected in a window from the real thing.

Becoming part of the solution

None of us want to contribute to the loss of birds. That’s why bird lovers have tried numerous ways to prevent birds from colliding with windows. A quick internet search will reveal a lot of ideas. You can find information on dangling string, parachute cord, or even old CDs from a window frame; using tape to make a pattern on glass; and even using decals shaped like falcons, among many other suggestions.

Even renowned bird expert, David Sibley, has tried different methods to reduce window strikes at his own home. Sibley experimented with drawing a fluorescent grid pattern on window glass with a yellow highlighter marker. Sibley’s results were mixed, but he says the basic idea is to break up the reflection on the glass to show birds there is something in their path. At the same time, keeping everything aesthetically pleasing and not destroying the view from the window.

Fatal Light Awareness Program (FLAP) Canada is a registered Canadian charity recognized as an authority on the bird-building collision issue. Their webpage provides a wealth of information on the issue, and they even have a bird death counter that shows the number of birds that have died due to window collisions in the time you spent on the site. FLAP provides a free FLAP App, which is a risk assessment tool designed to estimate daytime and nighttime collision threats that a building poses to birds. You can also do a home risk assessment on their webpage to identify hot spots, such as windows that reflect a lot of light or are near feeding or resting sites.

As Sibley notes in his personal experiments, there really is no quick and easy fix. Some methods work in some situations, while others do not. But trying something is better than doing nothing.

My husband and I enjoy feeding birds in our yard, and we are currently looking into solutions to avoid causing bird fatalities. Of the numerous ideas we’ve come across, the following list provides some of the most promising solutions.

Other good sources of information

BirdSafe has a page with tips on what you can do to keep homes safe for birds.