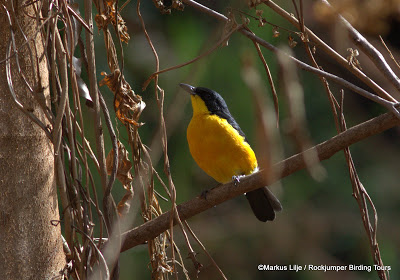 Africa boasts a unique and rich assemblage of wildlife that rivals any other region of the world. From the savannas of East Africa, the unique Cape Floral Kingdom to the mighty rainforests of West Africa, there is something exotic and special about traveling and exploring this wonderful continent. It’s no wonder so many people consider themselves Afrophiles and return trip after trip! The country of Cameroon is without a doubt one of the finest birding locations on the African continent and every year the birding tours that visit this extraordinary destination just keep getting better and better. The birds have always been fabulous, however, the logistics are continually improving and Cameroon offers one of the world’s premier birding tours. The endangered Bannerman’s Turaco by Markus Lilje
This year’s first Rockjumper tour (guided by Keith Valentine & Markus Lilje) was once again a great success and our highlights included fabulous views for over an hour with at least five Grey-necked Rockfowl in the depths of Korup National Park. The lowland rainforest site of Korup is without a doubt one of the most exciting places to bird in Africa – due to the presence of so many highly sought-after lowland forest species. It also has a fantastic network of trails and we get to camp for a couple of nights in the heart of the rainforest, a special experience indeed! Korup always produces some first class birds and we particularly enjoyed the rare Vermiculated Fishing Owl, Bare-cheeked Trogon, White-spotted Flufftail, African Dwarf, White-bellied, Shining-blue and Chocolate-backed Kingfishers, Rufous-sided Broadbill, Yellow-casqued Wattled Hornbill, Brown-chested and Fire-crested Alethes, Woodhouse’s Antpecker and the scarce White-spotted Wattle-eye. In the cool Bamenda Highlands, we enjoyed some of the country’s most wanted near-endemics: the critically endangered Bannerman’s Turaco, Banded Wattle-eye, Bangwa Scrub Warbler and Bannerman’s Weaver were all seen exceptionally well. We also enjoyed a couple of good surprises in the form of a Fraser’s Eagle Owl that was found roosting in a small gully and the gorgeous Dybowski’s Twinspot. Black Crowned-Crane by Markus Lilje
West Africa’s birding potential is massive and Cameroon is without a doubt the premier location to view the largest variety of the region’s special birds. With ever-improving infrastructure and solid logistics, Cameroon is beginning to stand out as THE place in Africa to go birding and should be high on the radar for those keen on exploring the wonders of tropical Africa. 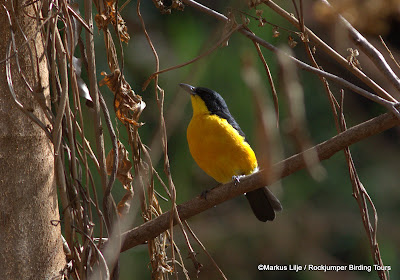