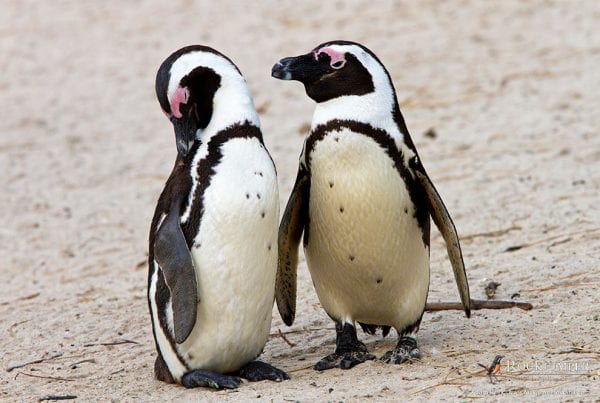 Penguins are nature’s best comedians. While an up-close Marabou Stork is spectacularly ugly, and an adult Bald Eagle is both regal and fierce, penguins are impossibly amusing. Waddling along so very bipedal, stumbling along stony beaches, braying loudly, they seem clumsy yet they are always impeccably attired.

When you see them in the water, you realise they are anything but clumsy, rocketing around, snatching fish and porpoising with great speed and agility – they become a marvel once in their element. They really aren’t built for navigating land so much, so as they walk and hop around their colonies, it is very hard not to identify with them, and admire every obstacle they overcome.

Today, our home country’s only species in the family, the African Penguin, encounters more and more obstacles. Their foraging areas for sardines and anchovies lying offshore from their existing colonies are being depleted by overfishing and the fish stocks have largely moved eastwards, out of reach of these colonies. Consequently, African Penguin numbers have plummeted by 60% over the last three decades. But BirdLife South Africa has a plan. An abandoned nesting colony at De Hoop Nature Reserve is located near a hotbed of waters rich with penguin prey species, and the fishery there has been stable for over 35 years, as the marine waters are protected. BirdLife has laid out a careful plan to establish a predator-proof fence across a rocky peninsula to secure the potential nesting area, and to re-establish the penguin colony. Now they only need the funds to do it.

Rockjumper is pleased to assist with a significant donation of R20,000 (USD1,716), and also happy here to advocate for the continued vital work that BirdLife South Africa does for our penguins and other threatened species, and we encourage you to offer them what support you can.

The African Penguin is an endangered species, and we have an opportunity here to help. Let’s do our part to keep them as fixtures forever on our beaches, and patrolling the adjacent seas.