Everybody’s Favorite, The “Seagulls” are Big in Japan 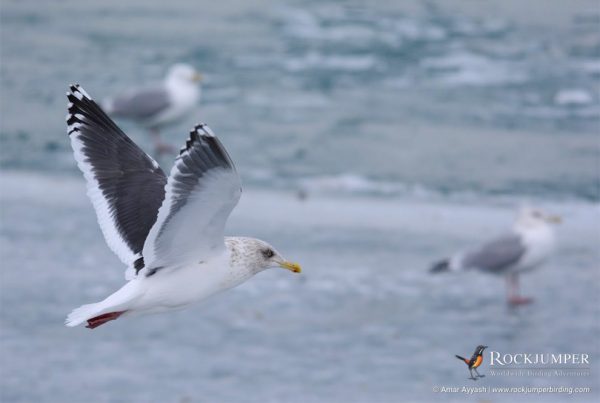 Amar Ayyash is leading the way to Japan in 2019/2020, and one thing is for sure: there will be cranes, some mighty big eagles, and, naturally, gulls galore. An expert on gulls, Amar has authored a number of technical articles on the beasts, and he remains dedicated to various projects throughout North America that aim to advance our knowledge of this family. He coordinates the annual Gull Frolic on Lake Michigan and also serves on the Board of Directors for the Illinois Ornithological Society.

Next winter over the holiday season, Amar sets his sights on Japan. There, Slaty-backed and Black-tailed Gulls abound, and with luck we should see the rare Saunder’s Gull, along with unfamiliar taxa such as Kamchatka Mew Gull, Heuglin’s Gull, and Vega Gull. Surely among them will be some fascinating puzzlers, and these shall be punctuated by snazzy Eurasian ducks, like Smew, Falcated Duck, and Mandarin Duck. Of course, the marvelous dancing cranes and magnificent Steller’s Sea Eagles are a big feature too, and we’ll search for the world’s largest owl, the Blakiston’s Fish Owl, and also Asian Rosy Finch, Daurian Redstart, and so much more. Amar is fired up! Learn more about him and what’s ahead in the feature below.

What do you like about gulls most? How did you become a “larophile”?

My first memory of watching gulls is perhaps the most boorish “spark-bird” story of all time. I was between classes as an undergraduate, where I found myself pitching French fries to a flock of gulls in a parking lot. One fearless bird stood on the hood of my car, and that short encounter left an impression on me. The feeding continued for some days. Drawn by their bold approach, I started to pay more attention to gulls and seek them out in different places.

When I learned of Sabine’s, Ross’s and Ivory Gulls, a monomaniacal impulse was triggered in me and I began enlisting birders to take long cross-country trips and red-eye flights to “twitch” these species. The fact that they’re relatively large birds, out in the open, and often very obliging makes them even more rewarding to watch.

What aspect of Japan are you most interested in?

Japan must be the most alluring land mass in all of Asia. The wide range of ecosystems and climatic zones, on a relatively small island, is unmatched. Very appealing to many birders and nature lovers, including myself, are the spectacles of large bird congregations at such close range.

Apart from nature, what is your next favorite pursuit?

When not thinking about birds and pursuing nature adventures, I turn my attention to photography. Over the years I’ve become fixated on landscape photography, although I’ve found it is very difficult to focus on this pastime as birds are always in my peripheral.

Do you have a jinx bird?

Yes. Black Rail. I’ve heard tales of people seeing them in the flesh, but I’m not sure I believe them.

Have you ever experienced an adrenaline rush while birding?

Many! The greatest birding adrenaline rush I’ve experienced is chumming a stubborn Slaty-backed Gull across state lines from Indiana into Illinois. The bird had been spotted the night before in Indiana waters, and I resolved to chumming it into Illinois. We relocated this fine Asian gem resting on an ice shelf the next morning. The only problem was it was sleeping a half mile out in Indiana. Some 15 birders stood in my shadow as I began lobbing fish parts into a frozen Lake Michigan. Much to everyone’s surprise, the gull took flight and made a beeline for us, landing directly where we were posted.  Immaculate views were had of what was the first record for Chicago.

Did/Do you have a birding mentor? How have they influenced you?

Many people have influenced me as a birder, but more than any other single person is the late Wes Serafin. Wes had an encyclopedic knowledge of everything nature-related, especially birds. A great mentor and friend, his willingness to patiently instruct me in my early birding years greatly improved my field craft.

What does your wife think about your birding?

My wife is forever in awe by my passion for birds. She isn’t a birder, but she certainly appreciates and supports what I do. She finds my obsession with gulls to be eccentric, and for lack of a better word, suspect.

Apart from birds, what other kinds of wildlife or pursuit do you most enjoy?

My twelve-year-old daughter’s fascination with butterflies has rubbed off on me in recent years. Taking her in the field to observe and study butterflies, as well as attending various workshops and festivals with her, has turned me into a closet lep-lover.