Our first Costa Rican adventure to the former “Banana Republic”

The tiny Central American nation of Costa Rica has, since the revolution in the mid-1950s, been gearing itself heavily towards tourism, and has developed a superb infrastructure to service numerous visitors from all over the globe, catering to a variety of interests.

If you want a relaxing beach vacation at a fancy resort, it can be found.

If you want a back-country trek, fully-outfitted to the top of the highest peak in the country, Mt. Chirripo (3820masl/12533fasl), that can also just as easily be arranged!

Eco-tourism was an early interest in Costa Rica, perhaps the first Latin American country to truly embrace the potential of this specific type of tourism. In kind, avitourism was quickly accepted, and an astonishing variety of lodges, parks, well-maintained trails, even hanging bridges and scenic viewpoints are scattered across the country through every imaginable habitat.

It took little time for travelling birders to discover that this small, former “Banana Republic”, had become far more than just that. Birders flooded to enjoy its wonders. With over 850 species, it is easy to understand why! The backbone of the country is formed by a towering, beautiful mountain range clad in oaks and bromeliads, where the cloud forests are home to exotic species, including the unbelievable Resplendent Quetzal, Black Guan, Fiery-throated Hummingbird, Golden-browed Chlorophonia and Spangle-cheeked Tanager.

A wide variety of habitats that included Caribbean humid forest and the northern Pacific lowland scrub were explored on our tour. We enjoyed many striking species of trogons, toucans, motmots, hummingbirds and migrant warblers, among numerous other spectacular birds, as we surveyed the best birding locations from the Caribbean to the Pacific, north to south. Thrilling birding, quality lodges, and an easy pace made this tour perfect for those who had yet to experience Neotropical birding.

With some forty-odd country and regional endemics to seek out, Costa Rica harbours more than enough speciality species to have appeased the more hard-core listers amongst our crew! This was one tour that truly sates every appetite, and that’s not even referring to the consistently delicious cuisine that we enjoyed from beginning to end.

It was for these reasons that we took hold of this golden opportunity back in 2015, and embarked on our first-ever Costa Rican adventure! Honestly, it could hardly be improved upon and we wondered how follow-up tours would measure up to the high precedent that had been set.

Nevertheless, we put an itinerary together that aimed at having quality time in nearly every special microhabitat in the country. With short travel times between sites accounted for, we were able to enjoy the best of every area we visited.

Having Richard Garrigues, the author of the most recent field guide to Costa Rican avifauna at the time, didn’t hurt either! His knowledge about the birds, coupled with 34 years of experience of living in-country, added a depth of knowledge appreciated by all.

In 13 birding days, we saw nearly 470 species, recording well over 480 in total! A fabulous trip tally, especially considering how much time we spent in deep forest habitats at various elevations. Add to that 13 species of mammals, 17 species of reptiles and amphibians, and one can rightly conclude that we had an impressively productive time in Costa Rica, by any standard.

Mention-worthy tour highlights that didn’t qualify for our traditional Top 10 were: several beautiful Northern Tufted Flycatchers, Acorn Woodpeckers at eye-level, Black-bellied Hummingbirds showing off their bizarre flat-top hairdos, Black-breasted Wood Quail and Great Tinamous coming directly towards us (to within 4m!) rather than away, bizarre Brown-billed Scythebill foraging overhead, Scarlet and Great Green Macaws cruising by in perfect evening light, a tree full of 41 Flame-throated Warblers baffling even the most imaginative reasoning as to “Why?”, and finally getting crippling views of Orange-collared and Red-capped Manakin, after fumbling through a massive mixed-bird party that was mobbing some obscured Forest-Falcon at Carara. Costa Rica really lived up to all expectations!

And as if that wasn’t enough, here is what participants voted as the Top 10 highlights: 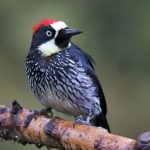 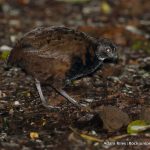 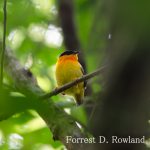 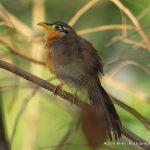 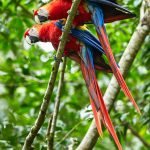 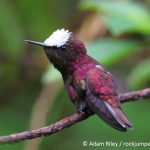 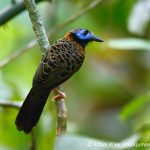