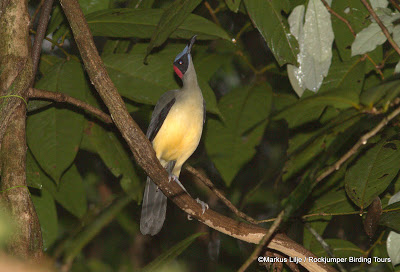 Cameroon is undoubtedly one of the best birding locations on the African continent, playing host to a number of Africa’s most sought-after species, including the spectacular Grey-necked Rockfowl (also known as Red-headed Picathartes). Both species of Rockfowl are restricted to central and west Africa and form their own, rather unique and aberrant family, considered the most primitive of all passerine groups. The participants on our first (of three) tours to Cameroon in 2011 were treated to one of the finest possible viewings of this stunning species in the depths of Korup National Park. On our first afternoon in Korup, we made an effort to visit a nesting location for this species with everyone hopeful that the bird would make an appearance. Our tours have been especially timed for the pre-breeding period, before any nesting activity takes place but during the period when the birds begin frequenting the colony site. Our high spirits, however, were quickly dampened by a massive downpour that lasted for almost an hour and even though we were tucked away in a cave, streams of water still flowed through the area where we were sitting, making life fairly uncomfortable! Once the rain abated, we were again on high alert for any tiny movement that may indicate the arrival of our quarry. We waited patiently for about twenty minutes before the first flicker of movement signalled that the Rockfowl was indeed in the area. With hearts pumping and adrenalin flowing, we all enjoyed our first views of the bird as it perched quickly on a vine and jumped onto one of the large boulders near the cave entrance. We were totally ecstatic with our initial views, however, nobody could possibly have predicted the sighting that was to follow – as we watched a total of five Rockfowl spend exactly 1 hour and 10 minutes in and around the cave system, jumping into their nests and onto the nearby vines while giving their almost prehistoric hisses on a continuous basis. What an unbelievable sighting, without a doubt one of the most incredible birding experiences of my life!