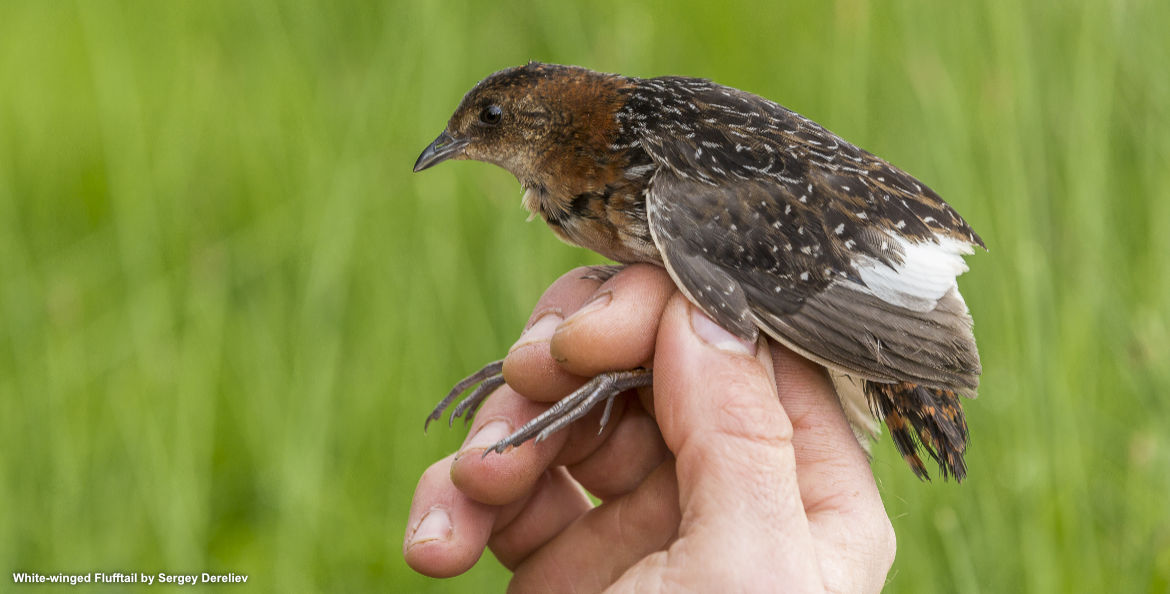 The White-winged Flufftail (Sarothrura ayresi) is one of nine flufftail species endemic to Africa. It is listed as a globally Critically Endangered and is considered to be one of the rarest and most threatened bird species in the world. The total population was estimated at no more than 250 breeding adults in 2013, with approximately 50 individuals remaining in South Africa. BirdLife South Africa recently provided the first updated population assessment of breeding White-winged Flufftails in Ethiopia, concluding that this subpopulation hosts approximately 55 breeding pairs at most, with severe threats from habitat degradation and loss. Ethiopia and, more recently, South Africa are the only two countries where White-winged Flufftails are known to breed, further emphasizing the importance of securing these vital sites to ensure that the species persists.

White-winged Flufftail population abundances and distributions have decreased over the years due to wetland destruction and degradation by activities such as mining, water drainage, agriculture, afforestation, grazing, pollution and peat fires. By protecting and promoting healthy wetlands for White-winged Flufftails, water resources and a host of animal and plant species that depend on intact wetlands for their survival are also conserved. Thus, White-winged Flufftails act as a flagship (or ambassador) species that raises support for preserving habitat structure and functionality, as well as the ecosystem services that people derive from wetlands. BirdLife South Africa and partners use the plight of White-winged Flufftails to educate communities and schools about water and wetland conservation in the country.

Despite the gradual accumulation of studies over the past decade, significant knowledge gaps still remain that limit governing bodies from making informed management decisions. Rockjumper Birding Tours through the BirdLife International Preventing Extinctions Programme are the Species Champions of White-winged Flufftail conservation in South Africa. Through their generous support, the position of Rockjumper Fellow of White-winged Flufftail Conservation was made available at BirdLife South Africa to have a conservation biologist dedicated to the research and conserve the species. Dr Kyle Lloyd was appointed to the post in April 2020 and has since initiated new research studies and conservation initiatives that will aid in safeguarding the White-winged Flufftail and its wetland habitat.

Kyle Lloyd grew up in the Western Cape and KwaZulu-Natal provinces of South Africa, where he developed a passion and love for nature. He studied for his BSc and BSc Honours at Rhodes University where like-minded people soon had him bitten by the birding tick. During the course of his studies, Kyle developed a concern for humanity’s abuse of natural resources and the lack of communication between scientists and practitioners. Kyle pursued his MSc in Conservation Biology at the FitzPatrick Institute of African Ornithology at the University of Cape Town where he was equipped with the tools needed to address environmental concerns. In desperate need of a break from studying, Kyle then grasped the opportunity to spend 13 months at Marion Island, where he collected data about elephant seals, fur seals and killer whales in a sub-Antarctic wilderness. He then completed his PhD on the Population and individual life history consequences of polygyny in male southern elephant seals at the University of Pretoria before starting his career at BirdLife South Africa. ‘I see this position as the perfect marriage of research and public engagement that uses evidence-based strategies to inform management decisions. I feel truly honoured to be a part of this endeavour and am grateful for the support of Rockjumper Birding Tours.’