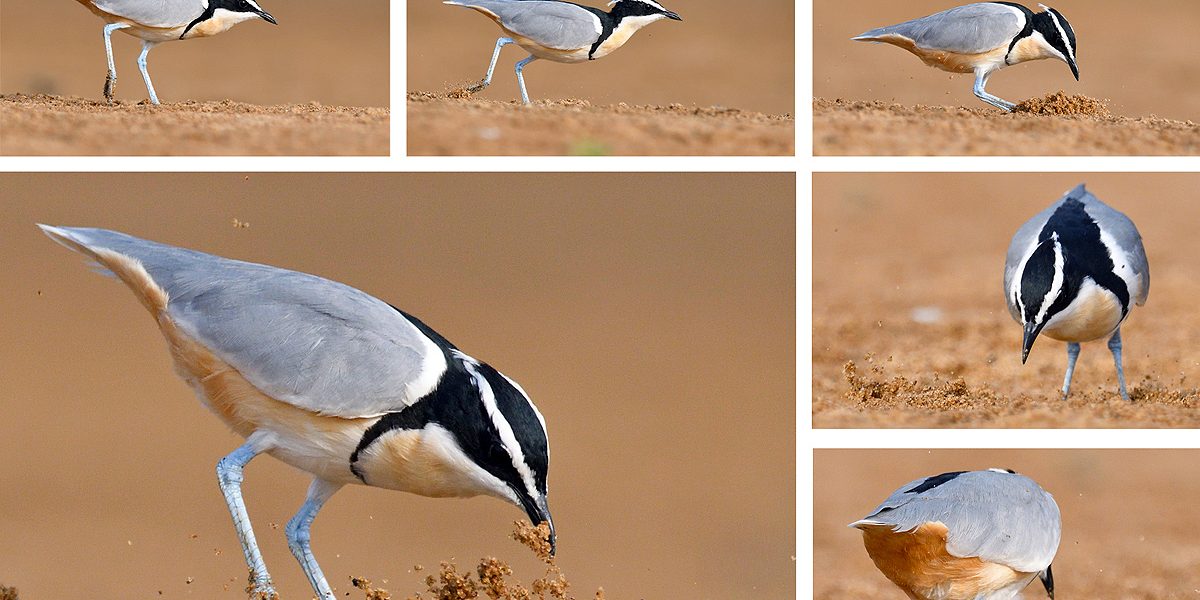 On his most recent Ghana birding tour, veteran Rockjumper guide Rich Lindie encountered one of Africa’s most sought-after birds, the unique Egyptian Plover. Here Rich recounts witnessing some fascinating behavior by this stunning bird, and he managed to captured these breath-taking images in the process.

I recently had the privilege of spending an incredible 15 minutes in the close company of some very confiding Egyptian Plovers, along the shores of the White Volta in northern Ghana. My original aim was to grab a few shots and be on my merry way, but what I ended up capturing and observing went way beyond that.

To say that the behaviour I observed took me by surprise is an understatement (although I could tell it was a form of foraging behaviour, rather than a display), and I’m very glad I managed to record some of it in a series of clear images. At first, however, I assumed I was witnessing some aberrant, or possibly opportunistic, behaviour in one bird. As it turns out, several of the birds in the area were later seen to be exhibiting the same technique. Added to which, I have now found that other observers have also witnessed this remarkable behaviour. Nonetheless, I was pleased to have ‘discovered’ it for myself.

Living primarily along the sandy shores of large rivers in West Africa, Egyptian Plovers can utilise a range of micro-habitats in which to find food – from the shoreline to pebble beds and the water’s surface, and even the small niches created by vegetation growing nearby. That variety of habitats obviously means they take a variety of prey items, several of which require unique techniques to capture. For one such type of prey – a very small, apparently sand surface-dwelling creature – the Plovers I saw had adopted a most acrobatic and entertaining feat.

Making short, rapid dashes from stationary positions, individual Egyptian Plovers were seen practising what can only be described as a leap – somewhat akin to the action and posture a long-jumper attains when making their sallies through the air. Also of similarity to such athletes were the landings these long-legged birds were performing – with both feet hitting the ground more-or-less simultaneously. The aim for the avian athletes, however, appeared to be to stun would-be prey, specifically minute flying insects (I managed to capture a few of the little critters in some of my photographs – unfortunately, none of them were satisfactorily in-focus to share). Basically, the repeated action went a little like this…

The plovers would make momentary pauses to search for their prey, which seemed to spend most of their time hovering above, or ‘perched’ on, the surface of the sand. After a short dash, the plovers would then purposefully leap toward the prey item, splashing up granules of sand with a hard-hitting crash, following which they would grab any stunned insects before repeating the process again. Not all forays were successful (indeed, I was only able to capture the flying insects when they were managing to escape), but I estimate that at least 40% of attempts were – perhaps making the ratio of energy expended to that gained a beneficial one. Either way, a rewarding experience to watch for us mere mortals!

In between watching this unusual behaviour, I took the time to grab several more typical shots of these birds but given the birds’ superb patterning, I think they’re just as worthy to share. Enjoy…

Known by some as the “crocodile bird”, the Egyptian Plover is the sole member of the family Pluvianidae, and thus a major target bird for family collectors (i.e. those wishing to see a member of each of the world’s 238 bird families).

Ranging across Sub-Saharan Africa, this Egyptian Plover was photographed by Rich in Ghana, but it can also be seen on other Rockjumper tours, including Cameroon, and The Gambia & Senegal.