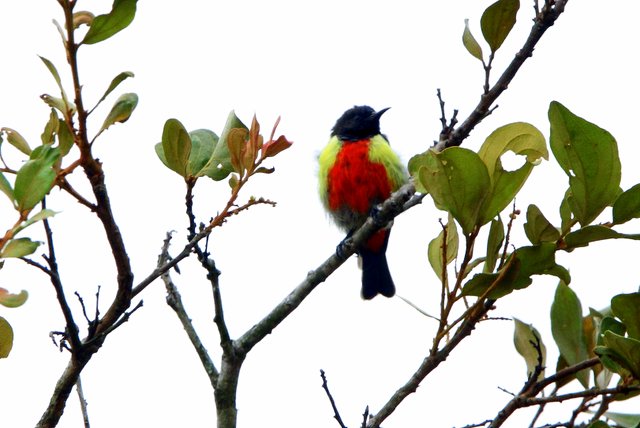 Having just returned from yet another fabulous adventure to Angola, I thought I’d let you all know what a fabulous trip this has become! I have lead tours to Angola since 2010 and there has been a remarkable improvement in infrastructure, especially the country’s roads, on an annual basis since then.

Rockjumper was the first birding company to offer tours to Angola in 2004, after the civil war ended. Initially this was a really rough expedition as the roads were in such bad condition that we often needed several days to get from one location to another. On top of this, a number of species had not been seen for many years and their status was uncertain. All this, however, has now changed for the better.

Since then we have lead a number of very successful tours to this country and in 2011 we enlarged our itinerary to make it even more comprehensive, with excellent chances for all the endemics as well as the numerous near-endemics shared only with Namibia, Democratic Republic of Congo and Zambia. In fact, our 2011 and 2012 tours scored all of Angola’s endemics, for which we are particularly proud! (For further information on these two tours, please see our detailed trip reports here)

As mentioned, the road network has been radically improved throughout the country and about 90% of our tour route is now covered by good tar roads, with even the remaining 10% of gravel roads having been markedly improved. Due to the shorter and more comfortable drives, this has also increased the amount of birding time we can enjoy, enabling us to reduce the tour by a day to 18 days in length. In addition, our ground operations team have a wonderful crew who set up camp and provide delicious meals in areas right near the best birding sites. Furthermore, the tents are spacious and every possible necessity is brought along with us to make this camping adventure as comfortable as possible. This includes a portable shower (with hot water!) and even a portable toilet. A gazebo is also provided to provide shade during meals and relaxation time.

To sum up: Angola has never before been this accessible and still has significant areas of intact habitat! Logging, however, has unfortunately reared its ugly head in many of the forests and “slash and burn” agriculture is common practice in the countryside, so who knows how long these forest fragments and their birds will remain? Nonetheless, with peace prevailing throughout the country and a good road network and excellent ground operations crew, there can be no better time to visit this brilliant birding destination.  Why not join us on this fabulous adventure?