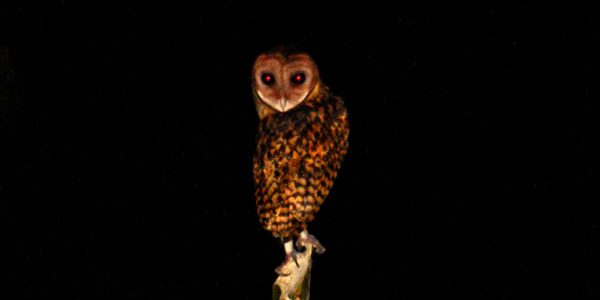 Very few birds are as mythical and little-known as the Golden Masked Owl, a gorgeous and diminutive Tyto owl that is endemic to the island of New Britain, which in turn is a small, under-explored island situated off the east coast of New Guinea.

This species was, until very recently, known only from two specimens and a single sight record. However, something very exciting materialized in the weeks leading up to our 2015 New Britain tours. While guiding a group of Japanese tourists around the island, the local guide, Joseph, who is based at Walindi Resort on the east coast of the island, was driving his clients around looking at fireflies in the adjacent oil palm plantations when a small, golden-coloured owl appeared in his flash-light. He immediately knew what the owl was as he had found a dead specimen of the species in the lodge grounds only two years ago. Absolutely blown away by the discovery, he drove back to the lodge and reported it to Shane, the lodge manager, and the two headed out to the same area the next evening, armed with a video camera. Quite incredibly, they found the bird in the same vicinity and managed to obtain some excellent video footage of this mega-rarity. Finally, the unknown Golden Masked Owl was on the map!

With much excitement and anticipation, we arrived at the lodge to begin our inaugural New Britain tour of the 2015 New Guinea season. We chatted to Joseph on the first evening and formulated a plan on how we were going to try and find this mythical species, and on the second night we left the luxuries of our wonderful lodge and embarked on our Golden Masked Owl quest. We drove along the road where Joseph and Shane had seen the owl and also scoured every other road in the general area, but to no avail. A little disappointed but not in the least bit surprised, we returned to the lodge empty-handed. On our third night we ventured out again, but this time we’d literally just left the lodge and driven about two hundred meters along a gravel, oil palm harvesting road when Joseph reminded us that this was the place where he and Shane had videoed the owl just a few weeks ago. Almost as soon as he finished his statement, our lights met an object perched on a low stump at the edge of the road, right in the middle of a large oil palm plantation! We couldn’t believe it! Our hearts skipped a beat when we realized that it was indeed a Golden Masked Owl! We were almost too excited to even think. I had a quick look and reached for my camera to at least try and squeeze off some kind of a record shot. I managed to fire off a few poor shots, but we were able to edge closer and closer until we were eventually fairly close. The owl obliged and everyone obtained even better views, and I managed to obtain a few decent images such as the one used for this post. On an all-time high, we returned to the lodge, absolutely delighted by this extremely fortunate encounter!

On our final night on the island we decided to have one last try, and quite amazingly, there it was, sitting on a similar post in the same area as the previous night. We enjoyed further excellent views before it took flight into the nearby plantation. A quick look, however, on another nearby track saw us reuniting with the bird again and we were treated to final, satiating views of this beautiful and exceedingly rare species. We then bid farewell to one of the rarest birds on earth, knowing that this was indeed a very special birding moment and one that we will all cherish forever!

(Unfortunately, we were unable to find the owl on our second and third New Britain tours, so one has to wonder: when will the Golden Masked Owl be seen again? Will it become an annual event, or will it remain an unknown, an  unseen “phantom” for the next few decades? Only time will tell…)