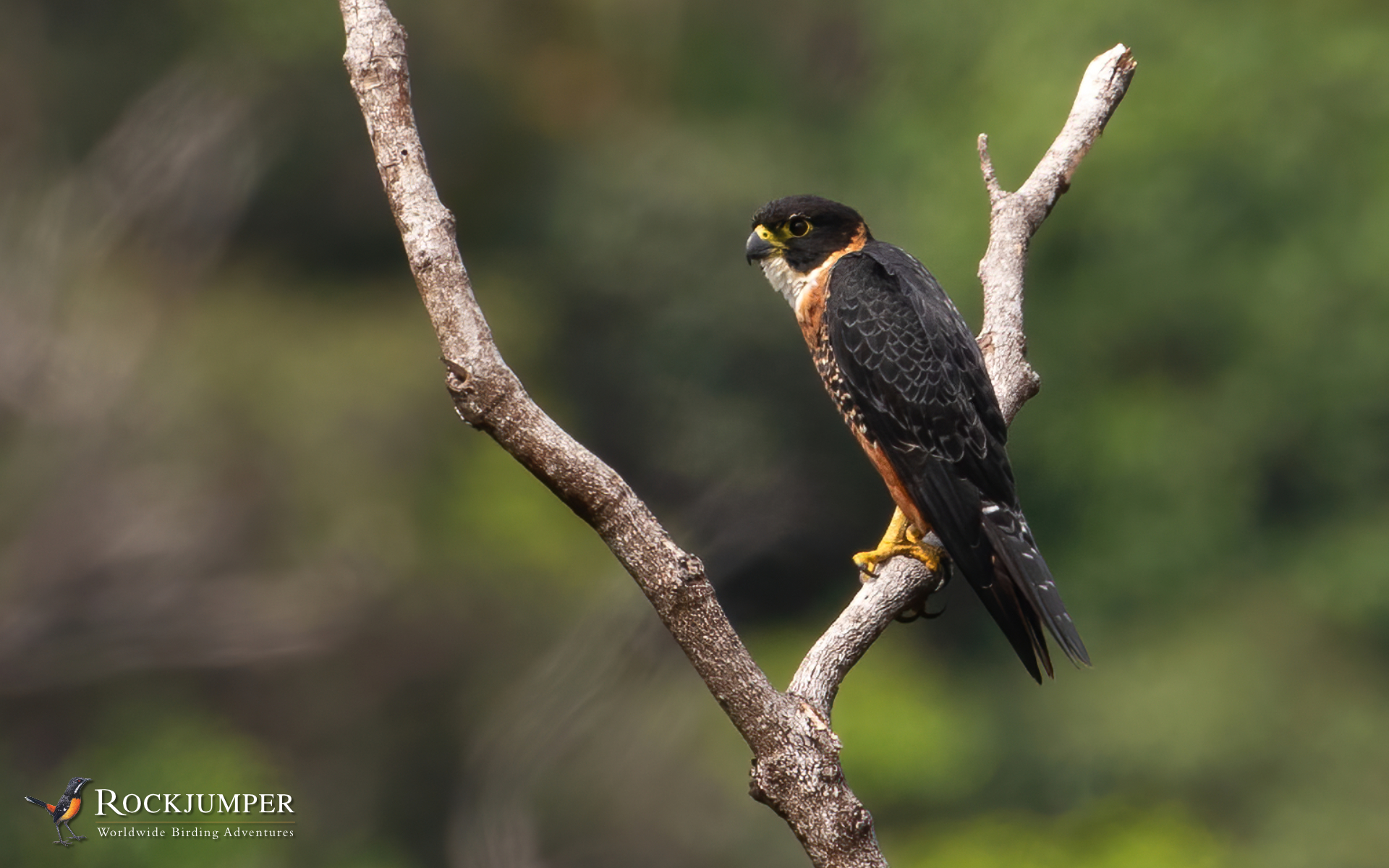 Maybe it happens as you stand at the foot of an awe-inspiring tepui. These jaw-dropping table-top mountains rise steeply and suddenly from the forest floor in Guyana, Venezuela, Brazil and eastern Colombia. Or perhaps you're admiring the incredible view from atop a Mayan ruins in Guatemala, Belize or Mexico. Regardless of where you are, when you finally see an Orange-breasted Falcon and see one well, it is hard not to be captivated. It is a moment you are not apt to forget.

Some birds just have presence and this is one of them. Attitude and presence to spare. Hunting high against the sky, using its exceptionally large feet to snatch up doves, parrots, tityras, tanagers, and even speedy aerialists such as swallows and swifts, this rocket of a raptor requires unbroken forests. It excels in tropical wilderness, from Mexico on down to Argentina, in areas where expanses of older forest give way to savanna or other open areas. And especially when these spaces abut sheer faces, one may see this turbo-charged tropical version of a Peregrine Falcon. Regarded as Near Threatened by the IUCN, the Orange-breasted Falcon is common nowhere, and solid sightings are treasured both because it is confused regularly with the daintier, more common Bat Falcon, and because the Orange-breasted has suffered steep declines.

As we all know, mature forests in the tropics are imperiled and often isolated. The Peregrine Fund and other conservation organizations have been engaged in a multi-decade effort now to restore and protect the regal raptor, especially in the northern part of its range. Their amazing work has led to some success there, where probably most sightings of the species occur for birders, even though it is here that the declines seem the steepest. Bird trafficking has had an effect on this species as well, leading many to guard information about nesting sites carefully. While the astounding ruins of Tikal in Guatemala are a well known spot, and we offer custom tours to Belize where the falcon appears on the uptick, Guyana and eastern Colombia yield sightings as well. The Guianan Shield owns some of the most amazing landscapes on Earth, with incredible tepui formations rising dramatically, that provide great sites for falcon eyries.

Despite being the only South American country where English is the official language, and with a heavy Caribbean influence, Guyana remains a frontier in many ways and is also a good place to see Orange-breasted Falcon. One of the least densely populated countries in the world, and with home sites such as the astounding Kaieteur Falls, the Iwokrama Forest (regarded as 1 of 4 remaining pristine tropical forests on the planet), and the vast open Rupununi savannah, Guyana is a stronghold for the falcon. And while you're there you may see the sensational Sun Parakeet, the retina-scalding Guianan Red-Cotinga, the uber-rare Red Siskin, and magnificent mammals such as giant anteater, giant river otter and still others.

Increasingly popular, Rockjumper's 2021 Guyana Birds & Wildlife tour is already sold out however our January 2022 offering with Adam Walleyn still has spaces remaining. Join us for a new frontier to "the land of many waters".

See this video too on Birding in Guyana with James Currie after his recent foray there.