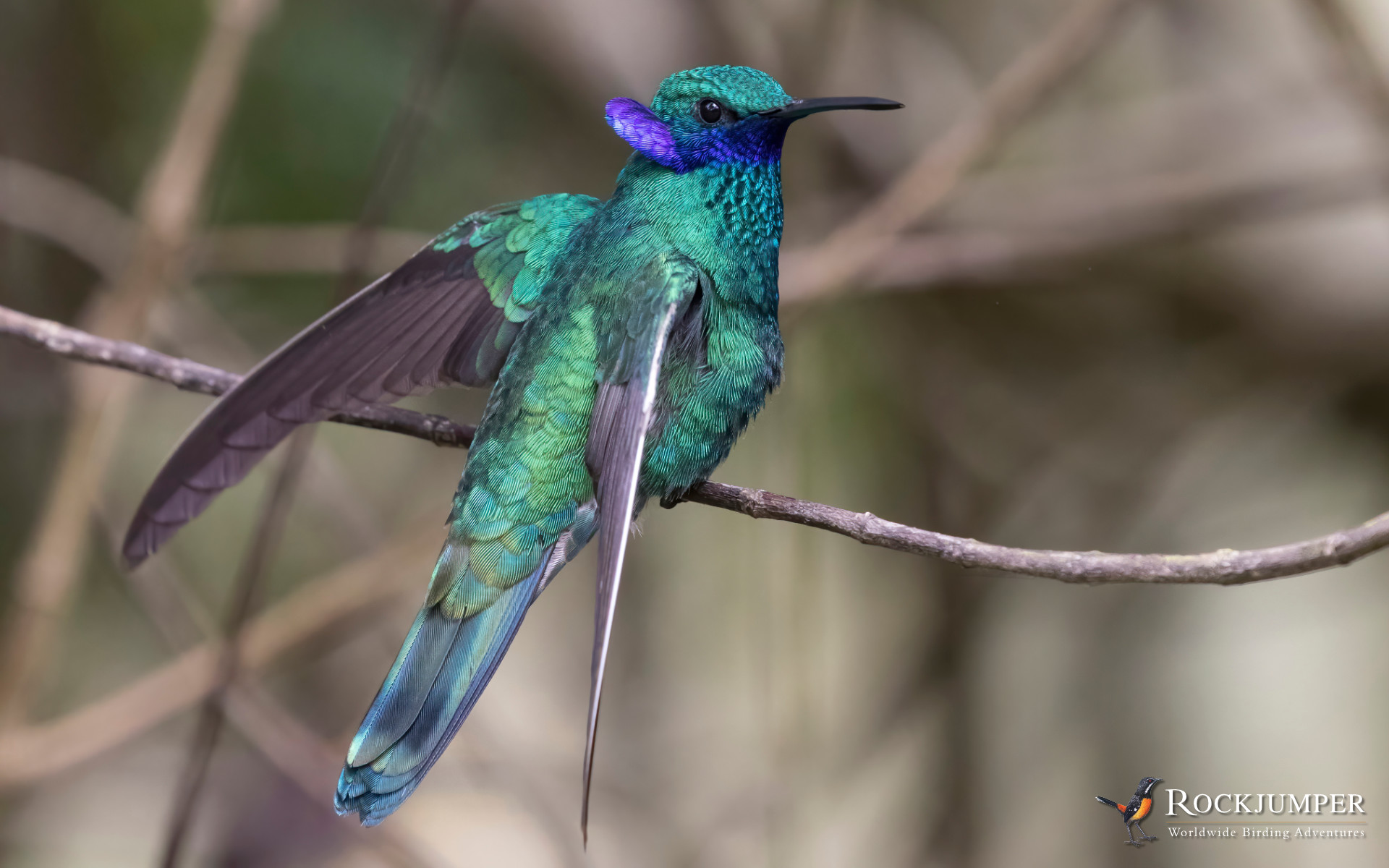 Looks can be deceiving and while the Sparkling Violetear may appear stunningly scintillant to us, to other hummingbirds it is simply a beastly brute. While the family (Trochilidae) may host the smallest bird species in the world, the brash bird pictured above is actually on the large side as hummingbirds go. And it is not an uncommon species either, instead often the most common species within its extensive range. As such, it is hard not to notice them when they're near.

How nice it is for us to be near them though. If you are visiting with one you must be someplace nice, rich with birds. Hummingbirds are endlessly entertaining, and the ghastly antics of the Sparkling Violetear are witnessed over many latitudes. Hugging the Andes from northwest Argentina on north, ranging all the way through Venezuela, they like open spaces with scattered shrubs and small trees, the fringes of woodlands, and are even found in fairly urban areas where there are feeders or vegetation for them. Vigorously territorial, they are NOT good at sharing. Quite vocal, you often hear them as they sing persistently and monotonously, a simple song of single notes, going on and on. They do so to be sure that any interlopers are clear about whose territory they may be traveling past. And should a passer-by amble in too close or for too long, then you will see a lot of attitude in a little time. Other hummers that wing in to try and enjoy nectar at feeders or flowers are buzzed at ferociously, scolded vigilantly, occasionally bodied out of the way physically, or even worse. Some have taken to re-branding this species the "Startling Violent-ear" due to its aggressive, pushy habits.

But this is just one member of a fascinating family of birds. Confined to the New World, hummingbird species are found from Alaska where Rufous Hummingbirds whiz about, all the way south to Tierra del Fuego where the Green-backed Firecrowns rocket around the Beech trees. They range in size from the aforementioned Bee Hummingbird of Cuba, the tiniest of all birds, to the Giant Hummingbird that feeds among the tree tobacco of the High Andes. As if their zippy movements, habits, metabolisms, and dazzling colors weren't enough, the names of these birds are bewilderingly imaginative as well. Consider the teeny tiny Booted Racket-tail, the Glowing Puffleg, or Bearded Helmetcrest, all possible on our upcoming Colombia Highlights tour. Or the Lazuline Sabrewing, the Crowned Woodnymph, or Tyrian Metaltail possible on the Colombia - Santa Martas extension. More familiar to many of you will be the Lucifer and Calliope Hummingbirds in North America, or the Blue-throated Mountaingem.

We mention these birds not heedlessly, of course. They can be seen and believed, even in the next few months. And the hummingbirds are just the tip of the iceberg.