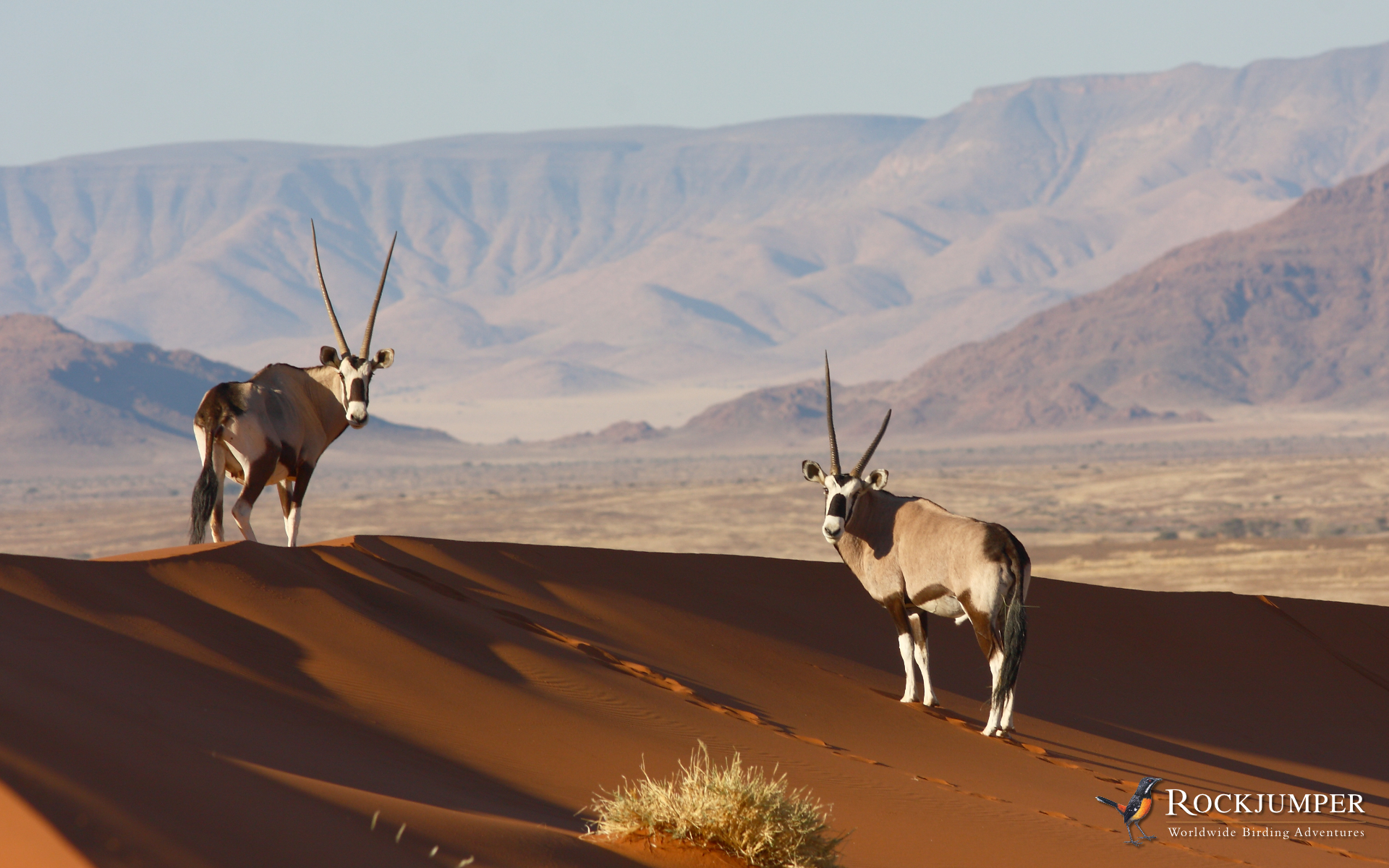 Here is your unicorn. Maybe the legend you seek is sinking its hooves into the soft peachy sands of the oldest desert on Earth. Or maybe it is in “the great white place”.

Unicorns are a funny thing. We still have not located one on a Rockjumper trip, but we remain ever hopeful and vigilant. In about 78 A.D. in what is commonly regarded as the world’s first encyclopedia, Naturalis Historia, Roman statesman Pliny the Elder wrote that “The unicorn is the fiercest animal, and it is said that it is impossible to capture one alive. It has the body of a horse, the head of a stag, the feet of an elephant, the tail of a boar, and a single black horn three feet long in the middle of its forehead. Its cry is a deep bellow.”

While we have seen and heard a great many things on our 300+ offerings over the years, this one still eludes us. But when you see a gemsbok, like the two pictured above, and they are in profile such that the two horns align as one, you can see how a legend might grow around such an elegant beast.

Fifty-five million years young, the Namib Desert is an otherworldly combination of bleak, beautifully desolate, and wild landscapes. Here reptiles and rodents do well. Home to critters like Grant's Golden Mole and the Namaqua Dune Molerat, bigger mammals are scarcer as few can manage the climate. The Gemsbok still hunted for its horns and at times marketed and sold individually as from a unicorn, is one that can. The desert is also home the magnificent, monotypic and endemic Welwitschia. A living fossil if you will, this gymnosperm sports the longest living leaves of any plant on Earth, some estimated to be 2500 years old or more. Perhaps a couple have been munched on by Pliny’s horned horse… or, maybe not.

Certainly, just as spectacular is Etosha National Park to the north, “the great white place” as Oshindonga natives called it. 20,000 square km (7700 sq miles) it is a mix of salt pans and grasslands and an utterly spectacular place for wildlife. “Big 5” game country, big animals feature strongly, as do birds of prey, and we see a nice array of bustards and coursers on our tour here, at what is also well known as one of the key sites for the critically endangered black rhino.

Our Namibia, Botswana, & Zimbabwe Overland Tour is among our very most popular. A truly epic adventure, to one of the wildest and least populated areas on Earth, with lots of iconic and unique wildlife we have several trips upcoming. We hope you’ll join us for this ultimate wildlife experience.