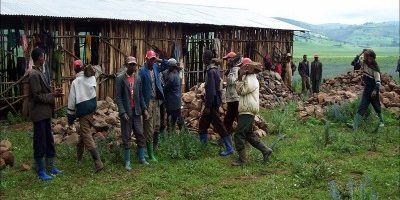 Middelpunt Wetland Trust was founded in 1993 with the specific objective of conserving the White-winged Flufftail and its habitat. At that time there were only three sites in South Africa where the bird had been recorded and ‘Middelpunt’ – a wetland between Belfast and Dullstroom – was one of them. The trust has leased the 60-hectare wetland since 1994 and has rehabilitated the site.

The flufftail is an extremely secretive bird and little is known of its biology and, consequently, the trust has undertaken research in Ethiopia, where the bird also occurs. The first nest, eggs and chicks were recorded in 1997 at a wetland called ‘Berga’, about 90 kilometres west of Addis Ababa.

Ethiopia has a rapidly expanding population, now in the region of 85 million, most of whom are subsistence farmers. Huge increases in livestock numbers have resulted in the moist grassland habitat in which the flufftail nests being heavily grazed and no longer able to sustain nesting.

A request to Middelpunt Wetland Trust in 2003 resulted in R25 000 being donated for the construction of a classroom in Berga for schooling of 60 pre-primary children. The village has continued to build classrooms from locally available wattle and daub and the trust has provided ongoing funds to assist with cement, windows, doors and desks.

Rockjumper is proud to announce that we have recently funded the completion and equipment of the school’s last two classrooms, providing education right up to the Ethiopian equivalent of matriculation. The school now has nine classrooms, 13 teachers and 875 pupils.

The school is called the ‘White-winged Flufftail School’ and the local community is fully aware of the benefits that the flufftail has brought to them. A site support-group patrols the wetland during the breeding season to prevent grazing and grass cutting, once again proving the conservation value of involving and benefitting a local community.

Although the major construction work is complete, Middelpunt Wetland Trust will continue its relationship with the school to the continuation of this very important project.