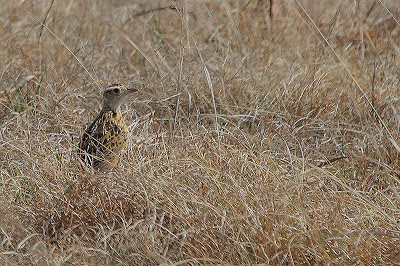 David Hoddinott has recently returned from 3 Ethiopian tours with several exciting discoveries under his belt. He writes:
On the 21st January, I travelled to north-eastern Ethiopia with a group on a reconnaissance birding tour. We visited the remote area of Jijiga, little visited by foreigners, let alone other birders. On seeing the magnificent grasslands to the east of town, we decided to bird an area of suitable habitat to look for Heteromirafra larks. Three known species exist in this aberrant genus of large-headed, small-bodied and short-tailed grassland larks:
1. The highly localized and threatened Rudd’s Lark, endemic to South Africa and restricted to several diminishing patches of pristine upland grasslands; Sidamo (or Liben) Lark, Liben Plains Ethiopia by Jacqueline Probst
3. Archer’s Lark, known from 2 sites in Somalia and not seen since it was collected in 1922! No living birders or ornithologists have seen this bird! Heteromirafra Lark (species yet to be determined), Jijiga Ethiopia by David Hoddinott
After just ten minutes of walking, we flushed a Heteromirafra lark and I managed to get decent photographs of this bird. This area appeared similar to the Liben Plains but these grasslands lie 590km northeast of the Liben Plains – some distance indeed, however, we were approximately 90km from the type-locality of Archer’s Lark across the border in Somalia. If it turns out that this species is Sidamo Lark, then this will be fantastic for the conservation of a critically endangered species, and if it’s Archer’s Lark – well then, even better, and another bird has been “rediscovered” for science. An alternative hypothesis is that Sidamo and Archer’s Larks are actually the same species and that several isolated populations exist. Whatever the final result will be, this was a significant discovery and of major conservation concern. We have been in touch with BirdLife International and the Royal Society for the Protection of Birds. A team of researchers from the RSPB is now planning a trip to the site in May. They hope to obtain DNA samples so that these can be compared with the specimens of Archer’s and Sidamo Larks. Their research will hopefully give us a better understanding of north-east Africa’s Heteromirafra larks, their taxonomy, population size, distribution and conservation requirements. Watch this blog for further developments!
X