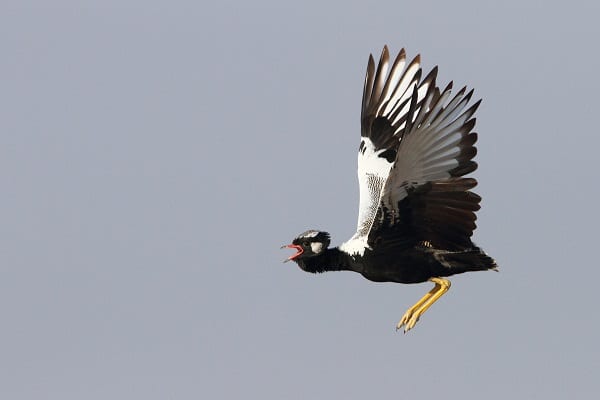 One of Rockjumper Birding Tour’s most popular departures is our Overland Namibia, Okavango & Victoria Falls tour which explores the absolute highlights of three Southern African countries. Namibia, Botswana and Zambia are all well known for their vast expanses of wilderness and teeming wildlife. Using the excuse that I hadn’t personally done this tour since 2004 (which was well before my photography days), I scheduled myself as tour leader for a recent departure. A quick re-familiarization visit in July soon led to the tour from late August into September. This was timed in advance of the intense summer heat and also before the rains, which means that the wildlife gathers in fantastic numbers around existing waterholes.

I’d love to share some of my favorite images with you from this trip. Desert Elephant
The famous Desert (or more correctly desert-adapted) Elephants of Damaraland are remarkable creatures. Although not a separate species or even subspecies from the African or Savannah Elephant, they display several adaptations to survive in their harsh environment, including longer legs, larger feet and the requirement of only drinking every three or four days versus normal elephant’s daily thirst-quenching. Rockrunner
The Rockrunner is one of Namibia’s special birds being near-endemic (its range just extending into southern Angola.) Its lovely melodious song is characteristic of the mountains of central Namibia, where this shy bird lives up to its name as it sprints between boulders as can be seen in this image. Lilac-breasted Roller
This beautiful feathered creature has been known to change many a traveler’s life by turning them into ardent birders! It’s hard not to become addicted to the sport of birding after seeing this gem! Spreetshoogte Pass sunset
This dramatic and rugged pass between the Khomas-Hochland highlands and the gravel plains of the Namib Desert offers unbeatable views and spectacular rosy sunsets. Red-necked Falcon
The delicate Red-necked Falcon is nevertheless a feared predator of small passerines. This bird had caught and was defeathering a Red-capped Lark from this dead-tree perch when his prey slipped through his talons and he had to drop down to the ground to retrieve it. Etosha National Park is famed for its magnificent Lions. This huge male in his prime dominated Newbroni waterhole. To see more images and read about an incredible afternoon with this male and his pride of 5 females and young lions, which included interactions with Elephants, Black Rhino and the killing of a Black-backed Jackal. Rosy-faced Lovebird
Africa is not endowed with as many parrots as other tropical lands, but what we lack in numbers we make up for in cuteness as this delightful Rosy-faced Lovebird so clearly illustrates. These tiny parrots nest inside Social Weaver colonies and are restricted to arid areas of Namibia and surrounding drylands. Pel’s Fishing Owl
One of the most sought-after sightings in the Okavango is the majestic Pel’s Fishing Owl. This massive ginger beast spends its days roosting in large, leafy trees and emerges at night to hunt from branches overhanging waterways. This bird was hanging onto the remains of a Tigerfish from the previous night’s hunt and every now and then would take a bite! Crimson-breasted Shrike
When Namibia was still a German colony, this bird was known as the Reichsvogel as its red, black and white colors were shared with the national flag of the time. This brilliant bird is pleasantly common, often seen foraging on the ground in open areas or its beautiful hooting duet emanating from surrounding trees and bushes.
X