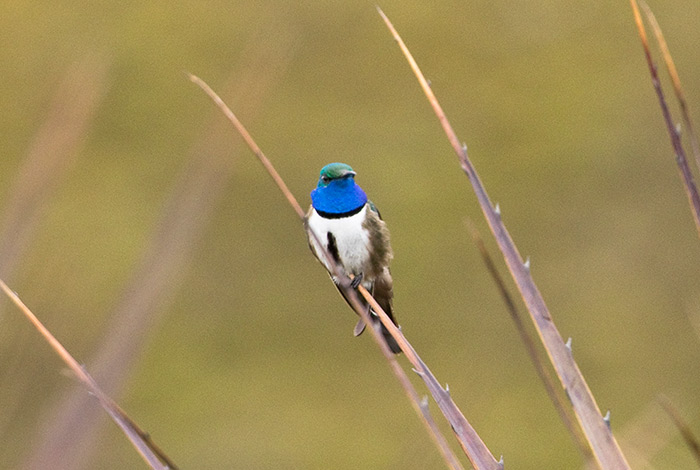 Due to a complex geology and topography, Southern Ecuador supports one of the most diverse habitat ranges in the world. Within 200 miles of the Pacific Coast, one can travel from the arid xerophytic coastal habitat, through humid Chocó and Tumbesian tropical dry forest, over the continental divide’s treeless Parámos and down to the lush, wet, foothill forests of the eastern Andes. Within these varied pristine habitats, the evolution of many fine endemic species has occurred.

This year’s Southern Endemics tour was very special, especially because of our observation of a new species of hummingbird: the Blue-throated Hillstar. According to the locals, we were the first tour group to ever see Oreotrochilus cyanolaemus, a striking species described to science as recently as September 2018! Also, the number of other amazing birds that we saw was simply overwhelming.

Highlights that we got to see in the high Andes included Giant Conebill, Tit-like Dacnis, the endemic Violet-throated Metaltail, Andean Pygmy Owl, Crescent-faced Antpitta and Chestnut-bellied Cotinga. The latter two are especially highly sought-after species that we watched from the very same spot!

The endemic and very local Pale-headed Brush Finch was successfully tracked down near Cuenca; while the desired Elegant Crescentchest near Vilcabamba was a welcome addition to the family listers.

At the famous Tapichalaca reserve, we got within a few feet of the endangered Jocotoco Antpitta, one of Ecuador’s star birds in the south.

In the rich Amazonian foothills at the base of the Cordillera del Condor, we got to see the stunning Orange-throated Tanager, a very local species. Other prize birds in the foothills included Grey Tinamou, Coppery-chested and Purplish Jacamars, Cinnamon Neopipo, Wing-barred Piprites, White-breasted Parakeet, Blackish Pewee and Foothill Elaenia.

In the Tumbesian forests, we scored with rainy-season breeders such as Grey-capped Cuckoo and Black-and-white Tanager, and also got the local Tumbesian specialties such as Blackish-headed Spinetail, Henna-hooded Foliage-gleaner, Grey-headed Antbird, Tumbes Sparrow, Tumbes Hummingbird, Ecuadorian Piculet, Slaty Becard and the fantastic White-tailed Jay, to name just a few.

The endemic El Oro Parakeets were watched at their nest site, and other highlights in the south-west included Pacific Royal Flycatcher, Ochraceous Attila and the massive Horned Screamer. Observing males of both Amazonian and Long-wattled Umbrellabird for an extended time was pretty epic, too!

What a fantastic tour this turned out to be. We can’t wait to do it again.