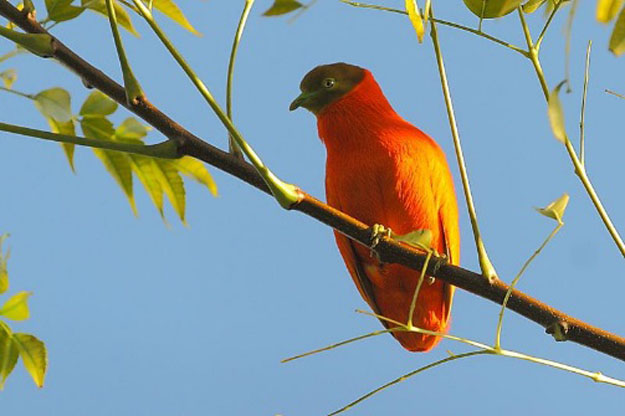 Our tours invariably turn up interesting and unexpected sightings, and here are the top 10 recent sightings from some of our tours that have run over the past few months as documented in our tour leader’s own words. This is obviously just a small selection, but should nevertheless give a good indication of some of the unusual species and experiences that make every Rockjumper tour special for our participants. Our first Papua New Guinea tour of the season was an immense success with loads of incredible birds, so many, in fact, that I saw 15 lifers and Adam Walleyn saw 6 (and we’re both veterans on numerous PNG tours!!!). However, nothing compares to the absolute highlight of our first New Britain Extension, which came in the form of seeing a GOLDEN MASKED OWL on two out of three nights!!! In fact, we were even able to capture the second ever known photographs of the species and our group became the first birding tour to see this mythical bird since the early 1980’s!” One of the absolute highlights of our recent Sulawesi & Halmahera – Wallacean Endemics tour was seeing a Geomalia (Geomalia heinrichi)! This very shy and elusive ground-dweller is endemic to Sulawesi and certainly one of the toughest birds to find on the island and is very rarely photographed! The Geomalia (also known as Sulawesi Mountain-Thrush) inhabits primary montane forest with dense undergrowth and moss forest ranging from around 1,700 – 3,400 metres above sea level. For a very long time, it remained a taxonomic enigma (amongst others, it was thought to be a babbler of sorts), and it wasn’t until very recently that researchers conducted molecular studies on the bird which confirmed it to be a thrush. This individual was seen along the famous Anaso track in the bird-rich Lore Lindu National Park in Sulawesi, Indonesia. A grey, drizzly afternoon was brightened significantly on our Bhutan II tour in April. We’d been driving the middle Lingmethang Road, searching for Satyr Tragopans, when a plump, scarlet bagpipe of a bird was sighted at the next corner. We edged closer, careful not to scare off our quarry. We needn’t have worried! This magnificent bird pottered about the roadside, allowing us to climb out of the bus and ogle him. We ended up watching him for at least 15 minutes – he didn’t even budge when another vehicle came past. What a beaut! We were walking through lush temperate forest near Morong in Bhutan when our local guide spotted an unusual-looking Sibia. Soon, all attention was diverted to the bird whose subtle grey and rufous plumage revealed it to be a Beautiful Sibia. While not a rare bird within its range, it seems it might be one of only a handful of records for Bhutan. We enjoyed great views as the bird was pretty relaxed.

This photo was taken in the late morning at around 2,200 m.a.s.l. The bird was in view for a fabulous 15 minutes (!) but was quite wary and shy of any attempt to get closer, hence the relatively poor quality of the image.

5. Sunbittern by Keith Valentine in the Brazilian Pantanal We were fortunate to have a few amazing sightings during a recent private tour into the depths of the Brazilian Pantanal. Naturally, one of the main targets was finding the elusive Jaguar and with success on this front being almost instant, it allowed us plenty of time to enjoy the Cuiaba River and its tributaries for some additional birding and wildlife viewing. One afternoon we spotted this fabulous Sunbittern on an exposed bank, which allowed for some phenomenal views. The bird was calling actively and strutting about, seemingly oblivious to who was watching. We probably observed it for around 5 minutes before it popped up into the air and dropped out of sight behind some vegetation. A spectacular bird belonging to its own family Eurypygidae, while also sharing a unique order, Eurypygiformes with the extraordinary Kagu of New Caledonia. During late August, we were birding the Megitimbe Wetlands, a great area for waterbirds not far from Waingapu on the island of Sumba. We recorded a good variety of species, including highlights such as a dozen Australian Pratincoles, a fabulous male Spotted Harrier, newly arrived Sharp-tailed and Curlew Sandpipers, Long-toed Stints, hundreds of Wandering Whistling Ducks, Pacific Black Ducks and Sunda Teals, among others. Arriving at a roadside rice paddy, I had barely put up the scope before I spotted a stunning Black-fronted Dotterel! I later found out that this species had been found a couple of weeks earlier a few kilometres away. As far as I am aware, these constitute the first ever record of the species for Indonesia. The normal range of Black-fronted Dotterel is Australia and New Zealand. One of the highlights of our Sulawesi & Halmahera – Wallacean Endemics tour was undoubtedly our multiple sightings of Hylocitrea. Endemic to Sulawesi, this species is placed in its own family and high up on many birders’ wish lists. Our first sightings were along the famous Anaso Track of Lore Lindu NP, near the summit of Mount Rorekatimbu. Here, the entire group enjoyed one bird sitting just a few metres away, allowing for perfect, open, unobstructed views for a couple of minutes, followed by another sighting in a nearby fruiting tree, where at least three birds were feasting on berries. A few days later, as we were about to locate the rare and localized Matinan Flycatcher up on Mount Ambang; again, not only one but two Hylocitreas appeared in front of us, and this was the occasion where the shot shown here was taken. The highlight of our inaugural Borneo – Black Oriole & Dulit Frogmouth Extension was finding this very rare bird within only a short while of arriving at the spot where it had recently been seen. Here’s the story: After dinner we got together for a planned night search for the Dulit Frogmouth, a rare and little-known species recently discovered in this area. We drove the short distance to the site and within a few minutes, our local guide’s quick spotting found the bird perched in a gully below us, offering fabulous looks. A short while later the bird flew off but was again relocated and scoped, so that we could enjoy even better views – fantastic!!! Undoubtedly one of the main highlights of our recently-concluded South West Pacific Islands – Samoa, Fiji, Vanuatu & New Caledonia tour, and this fabulous species showed extremely well on Taveuni. A real jewel and surely one of our planet’s most colourful birds!! During a recent tour of Taiwan, we were extremely fortunate to have heard about the first-ever record of Siberian Crane for the island. The individual, which was still slightly immature, was first found in December 2014 and, quite incredibly, in June this year it was still milling around the same small wetland at which it had originally been discovered. Luck was on our side as we found ourselves close to the site at the beginning of our tour and so a mini twitch of this rare species ensued. We found the bird in question immediately after arriving at the site as it stood out, head and shoulders above the egret species also in attendance. We watched and photographed it at close range for an extended period, a very lucky encounter indeed!

The Siberian Crane, Siberian White Crane or Snow Crane as it is sometimes known, is one of the rarest crane species and is currently listed as Critically Endangered. The western population of the species is on the verge of extinction with around a mere 10 individuals hanging on, while the eastern population that breeds in the Arctic tundra of eastern Russia has an estimated population of around 3,000 birds, of which around 95% of the population winters in the Poyang Lake basin in China. However, the risk of losing the last remaining population of these beautiful and stately birds is of major concern due to the planned building of the Three Gorges Dam, which will flood the valley and the crane’s wintering habitat.

We were extremely fortunate to have seen this rarity in the wild, a species that is declining every year and on the brink of extinction.