Rockjumper’s first Angola birding tour was successfully run in 2004, and we are now able to offer the most comprehensive Angolan birdwatching trip available. Our overland safari is an “off-the-beaten-track” expedition for those with a sense of adventure and the willingness to journey where few birders have previously ventured! We will cover all the major habitats and birding sites of Angola – from the parched Namib Desert to misty Afro-montane scarp forests, rainforest and Miombo woodlands.As we seek out all of Angola’s endemic and range restricted birds, our intrepid group can expect to find many species seen by just a handful of birders. Our previous Rockjumper trips to Angola have recorded over 500 bird species, while at the same time making a valuable contribution to the known distribution ranges and even existence of some of the rarest and least known birds in the world!

Our adventure includes the Tundavala escarpment, where cliffs dropping over 1000m onto the coastal plain below offer some of the most dramatic scenery in Africa. Here we will spend our time exploring extensive grasslands, patches of Afro-montane forest and rugged gorges for the striking Angola Cave Chat, Angola Slaty Flycatcher, Oustalet’s and Ludwig’s Double-collared Sunbird and Angolan Waxbill. As a complete contrast, we next venture to the Namib Desert’s gravel plains and stark coastline, where we will seek out a number of near-endemics shared only with neighboring Namibia, including Hartlaub’s Spurfowl, Rosy-faced Lovebird, Rockrunner, Monteiro’s and Damara Red-billed Hornbill, Benguela Long-billed and Gray’s Lark, Bare-cheeked Babbler and Cinderella Waxbill.

Moving on to the fabulous Mount Moco, we will enjoy searching for endemics that include the mythical Swierstra’s Francolin, Margaret’s Batis and Bocage’s Sunbird. Amongst a host of other sought-after species, we will also seek Finsch’s Francolin, Anchieta’s Barbet, Angola Lark, Black-and-rufous Swallow, Lepe Cisticola and Dusky Twinspot. From here we travel to Kumbira Forest near Gabela for three astounding days in this premier birding locality. Our target here is arguably Angola’s most beautiful endemic, the Red-crested Turaco, amid numerous other specialties, including Gabon Coucal, Hartert’s Camaroptera, Gabela Akalat, Pulitzer’s Longbill, Monteiro’s and Gabela Bushshrike and Yellow-bellied Wattle-eye. Next we visit the Kinjila area for the remarkable White-headed Robin-Chat and Brazza’s Martin. Thereafter we explore the Damengola area in search of rainforest species including the little known Braun’s Bushshrike. Our final destination will be Kissama National Park, where dry woodland and riparian habitats are host to the exceptionally localized Gabela Helmetshrike, elusive Grey-striped Francolin, Red-backed Mousebird, Bubbling Cisticola, White-fronted Wattle-eye, Angola Batis, Rufous-tailed Palm Thrush and Golden-backed Bishop. Our adventure will finally draw to a close as we head back to Luanda after sharing an amazing birding experience!

There is no more camping on this tour!

Please note: these prices are subject to foreign exchange fluctuations.

2022 Prices are a high estimate and may be reduced once clarity over post-Covid 19 local pricing is obtained by our agents and suppliers. 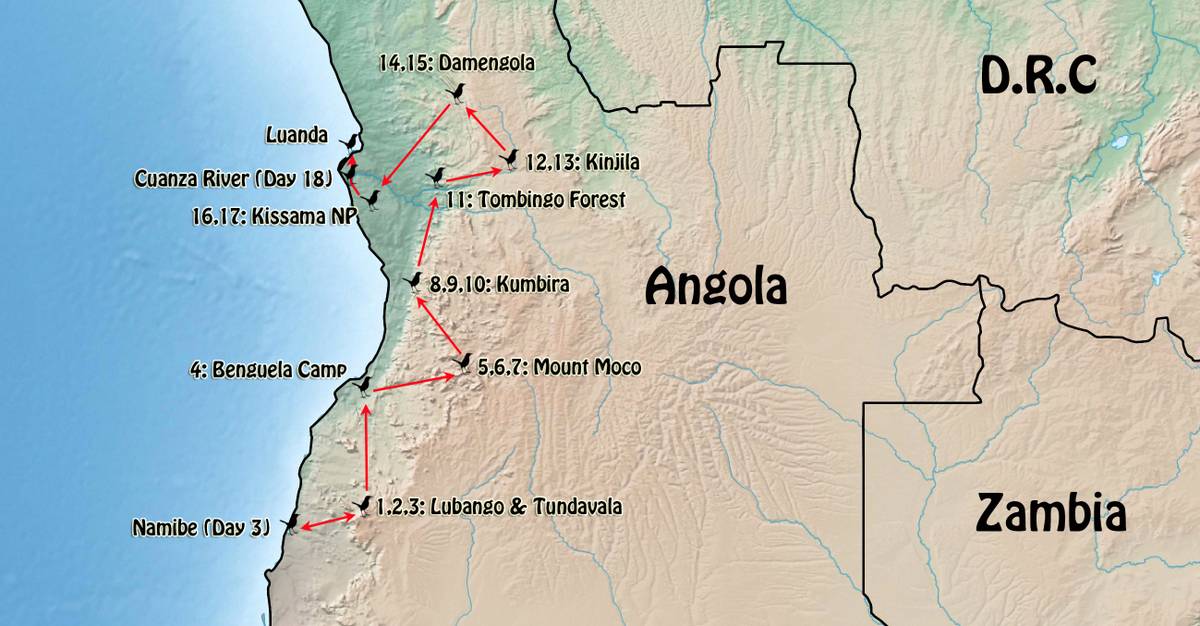 Dennis's knowledge & ability to imitate bird calls is phenomenal. He is also an interesting person to travel with. I enjoyed Eric's humour and felt he handled the group well.

André in particular went out of his way to make sure our stay was as wonderful as it could be. Andre is also a great guide, with the ability to spot just about everything that moves, even if the movement is only breathing.

Our tour was really exceptional, and our guide, Glen Valentine, was fabulous!!! Being in the jungle meant our views were narrowed, but Glen went out of his way to make sure everyone had a chance to see these exceptional birds.