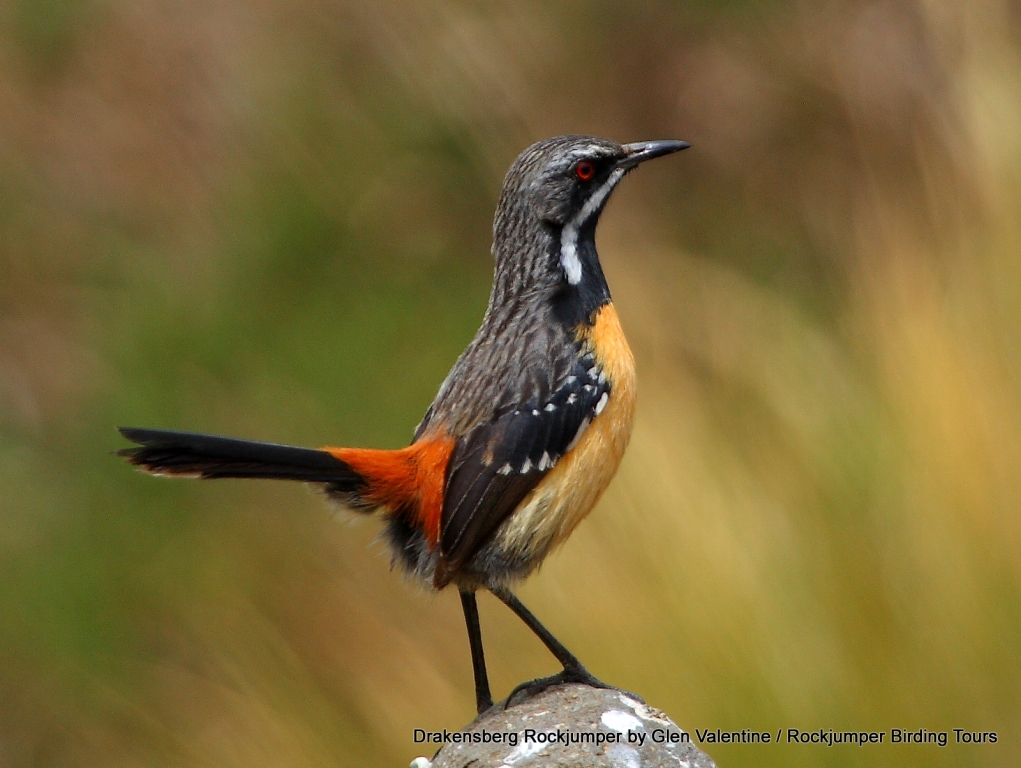 Glen Valentine recently returned from Rockjumper’s very popular winter South Africa tour – and what an immensely successful tour it proved to be! The trip scored an impressive 436 species of birds and 59 mammals! These tallies included an array of wonderful creatures (many of which are endemic to South Africa) and the following is a short summary of some of the most memorable and desirable species encountered on this 19-day birding and wildlife adventure: an amazing 9 species of bustard – which included Blue and Karoo Korhaans and Denham’s, Ludwig’s and Kori Bustards was hard to beat; while localized, endemic species such as Ground Woodpecker, Cape and Gurney’s Sugarbirds, Drakensberg and Cape Rockjumpers, Grey-winged Francolin, Bush Blackcap, Knysna Turaco, Southern Bald Ibis, elegant Blue Crane, Black Harrier, an astounding 11 species of lark – which included the rare and localized Rudd’s and Botha’s Larks, Yellow-breasted Pipit, Cape and Drakensberg Siskins, Sentinel and Cape Rock Thrushes, dainty Fairy Flycatcher, Black-headed Canary, Cinnamon-breasted Warbler, Buff-streaked Chat, dazzling Orange-breasted Sunbird and the endangered Cape Parrot all put on an amazing show! Other highlights included superb views of Lammergeier in Lesotho, the elusive Southern Banded Snake Eagle, Spotted Ground Thrush, Wattled and Grey Crowned Cranes, Green Malkoha, Eastern Bronze-naped Pigeon, African Finfoot, Pink-throated and Green Twinspots, Rudd’s Apalis, Southern Pied Babbler, exquisite Neergard’s and Malachite Sunbirds, Woodward’s Batis, African Rail, sensational Narina Trogon, Mangrove Kingfisher, Southern White-faced Owl and the rarely-seen Swamp Nightjar. The mammal-viewing was sensational too and we had one of the best trips ever in this regard! In fact, the trip kicked off with a lifer mammal for the leader – an Aardvark (a rare, bizarre and extremely elusive nocturnal mammal), which was encountered strolling alongside the road at 14:30 in the afternoon! The luck continued and we were thrilled to have amazing views of sought-after species such as Cheetah (three separate sightings!), Leopard (seen twice!), Lion (including a very impressive male and cubs!), extremely scarce and nocturnal Side-striped Jackal, African Civet, Blotched Genet, a pack of the rarely encountered African Wild Dog, African Elephant, White Rhinoceros, African Buffalo, tiny Blue Duiker and endemic Grey Rhebok, as well as 3 Humpbacked Whales during our pelagic seabird outing off the Western Cape! All in all, an extremely memorable and enjoyable trip with a multitude of rare and special encounters!

Below is a small selection of some of the photographic highlights of this incredible tour, all of which were taken by Glen: