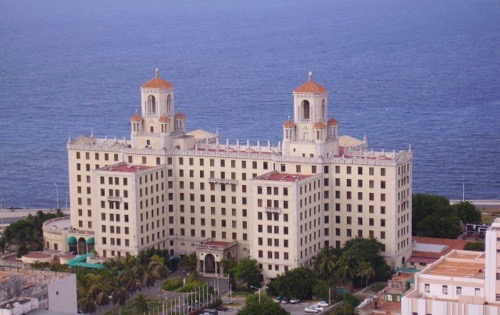 I have had the great privilege of visiting all of the Greater Antilles on a number of occasions, but some of my best experiences have come in Cuba. Aside from the diverse birding opportunities, Cuba was a living history – a country trapped in a time bubble set in the 1950’s. However, this will not last for much longer, and Cuba should be visited sooner rather than later. Not due to any imminent loss of species or habitat – for Cuba has been an excellent custodian of its environment, no, because the essence of Cuba is irrevocably changing, and quickly. In as little as six years I have watched Cuba’s 1950’s automobiles diminish from the de facto form of transport to a mere sideline of tourist interest. Hotels are being erected at break-neck speed to host the impending tourism avalanche. The capacity to be the first foreigner to visit out of the way towns and villages is gone. Soon, Cuba will be just another Caribbean island, practically inseparable from the rest. The legacies of Jose Marti, Ernesto ‘Che’ Guevara and the brothers Castro quickly eroded by mass commercialism. For as long as most of us have been alive, Cuba has been a tantalising but unreachable destination. When Cuba discovered the allure of tourism dollars at the turn of the century, the world descended upon this emerald jewel in the azure Caribbean Sea – except of course if you happened to be from the United States. Barring a small number of brave individuals who defied US law, most US citizens have had to sit and watch as this island state only 90 miles away remained resolutely off limits to them. Branded a pariah state and a sponsor or terrorism, this small nation paid a severe price for refusing to kowtow to the US interests. Successfully defeating the US backed interventionists at the Bay of Pigs was one thing, bringing the world to the brink of nuclear war during the Cuban Missile Crisis was quite another. Frosty relations became set in an ice age of mutual distrust that has taken over 50 years to even begin thawing. The recent easing of sanctions has offered many US citizens the opportunity to engage with Cubans for the first time in their lives. It has been my experience at least, that despite generations of political animosity – the Cuban people are an incredibly warm and friendly nation, for whom historical grudges have no bearing. So just what can one expect after arriving at Jose Marti International Airport, Havana? Downtown Havana is remarkably open, with little in the way of traffic, but heavy on historic buildings, landmarks and plazas. If you only have a short time to see the city, I’d recommend starting in La Habana Vieja and take in the four main plazas – Catedral, Armas, Vieja and San Francisco. Having wondered these historic squares, many replete with images before and after restoration, head over to Parque Central. Here the magnificent El Capitolio building over shadows a leafy square and a marble bust of Jose Marti. The historical seat of Cuba’s National Assembly before 1959, the building has been little more than a museum for the last 5 decades. Renovations work begun in 2013 will see Cuba’s National Assembly return in the near future. Of significant interest to history and art buffs, the Museo de la Revolución could take up the better part of one’s day. Formerly the Presidential Palace until the Cuban Revolution, the museum now houses a large number of important artefacts mostly dating from the Cuban Revolution to the present day. Treasures include the Granma, the boat that took the Castros and their revolutionaries from Mexico to Cuba, Che Guevara’s radio transmitter, Fulgencio Batista’s gold telephone and Arnaldo Mendez’s space suit.

As the afternoon cools down, take a stroll along the Malecón (known locally as the ‘big sofa’ as many locals while away the early evening sitting and talking on the concrete berm). Finally, enjoy a relaxing 20-minute walk along the coast to reach the Hotel Nacional. Host over the years to the likes of Winston Churchill, Rita Hayworth, Frank Sinatra, Bashir al Assad, Hugo Chavez, Meyer Lansky and Al Capone – this hotel even has it’s own nuclear bunker. End your day watching the sun dip over the Caribbean Sea with a mojito, or the quintessential Cuba Libre.

While traversing the Cuban capital, it is worth keeping an eye out for the endemic Cuban Blackbird, endemic sub-species of Red-legged Thrush as well as a number of migratory North American warblers. During our tour, we cover a number of interesting historical and cultural sites in search of birds. One of our first stops is Las Terrazas in the Sierra del Rosario Biosphere Reserve. Entirely logged and cleared for charcoal and then tea and coffee cultivation, it was a mere 45 years ago that the eroded landscape was terraced and reforested with more than eight million trees – planted and grown hand, tree by tree.

Moving further westwards into Pinar del Rio province, we visit Cueva de los Portales. This series of eroded limestone caves are now a national monument, and were used as a base by Comandante Ernesto “Che” Guevara and his Western Army during the 1962 Cuban Missile Crisis. The original ash block room is still present, replete with bed and chessboard where Che whiled away the hours. Leaving western Cuba behind, we head back to Havana before turning south to the Zapata Swamp, home of close to 80% of Cuba’s endemic bird species. The drive is relatively mundane for the most part until we reach Australia – a small town just before reaching the northern end of the Zapata Swamp, certainly not the country! Large signs commemorate the Cuban victory at the popularly named Bay of Pigs (known in Cuba as the Batalla de Girón), where a CIA-sponsored paramilitary group of roughly 1400 paramilitaries was defeated by Cuba’s revolutionary forces within three days! As you depart Australia and drive the remaining 30km’s to Playa Larga, even the most non-militaristic observer would wonder at the logic involved in having such an invading force attempt to march up a thin strip of land such as this. It will become patently apparent over the next few days that the Zapata Swamp is no place for marching – with endless sawgrass and deep channels home to Cuban Crocodiles. Alongside the road, numerous concrete memorials stand testament to the 176 Cuban soldiers killed in action. Much further down the road from Playa Larga is Playa Giron, the landing beach after which the Cubans named the battle. Here a small museum further commemorates the battle with a small number of aircraft and tanks stationed outside, a useful place to grab an ice-cream across the road. En route to Najasa, we take some time to explore the central Cuban city of Santa Clara. The city is famous for being the final battle of the Cuban Revolution and consequently the burial site of Comandante Che Guevara. Despite being almost 300km away from Havana, the battle that ended in the afternoon of the 31st of December 1958 saw incumbent dictator Fulgencio Batista flee the country within in 12 hours. At dawn on the 1st of January 1959, Cuba had not just a new leader – but a completely new direction.

Our final stop on the tour is the northern central province of Ciego de Ávila Province and the Garden of Kings (Jardines del Rey). The islands played a central role in Ernest Hemingway’s famous novels, The old Man and the Sea for which he won a Pulitzer Price and Islands in the Stream. Statues of Hemingway replete with a fishing rod and pipe occupy both sides of the causeway between Cayo Coco and Cayo Guillermo. Departing the mainland, we traverse a 27km long dual carriage causeway, nothing but a thin line through the Bahia de Perros (Bay of Dogs) and into the horizon. While providing a magnificent view, the causeway initially caused salinity issues in the bay due to a lack of water flow. Consequently, a number of large pipes and bridges were installed to allow for better tidal flow. The mercenaries made it to here, Zapata © Clayton Burne

Our prime reason for being in Cuba are the birds of course, and while there are relatively few species of interest in Havana itself, one should keep an eye open while scouting the city. So, what exactly are we here to see? Aside from the masses of attractive migrant North America warblers, our primary focus is aimed at Cuban Endemics and Greater Antillean specialities.

Cuba has 28 endemics, 1 breeding endemic and roughly 12 Near Endemics / Greater Antillean specialities of interest to us. Of the endemics, Cuban Kite and Zapata Rail are impractical, while a host of others are either rare or very localised. Of the remaining 26 endemics, we have an excellent record of finding almost all of them on every tour, along with all 12 of the near endemics.

Full details on all endemics, as well as tour statistics and species images will be posted here shortly.