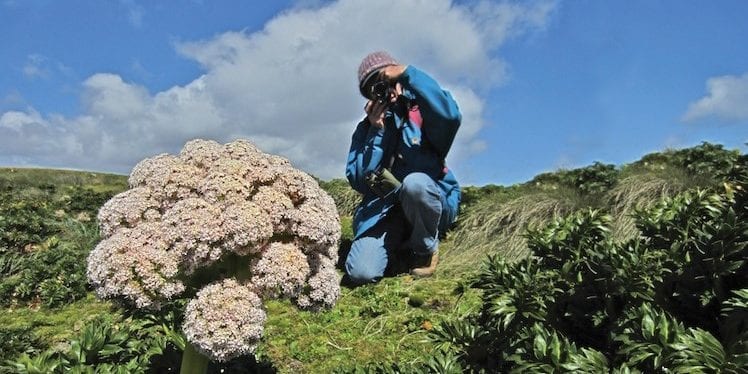 In light of our upcoming New Zealand Subantarctic Island Cruise, we decided to provide 5 great reasons to visit the #ForgottenIslands! Here is #3!

One of the most notable features of Megaherbs is their incredible size. With their expansive leaves and flowers, they are an incredible example of nature’s ability to adapt, and, in the case of Campbell Island, they have adapted well to the island’s harsh weather conditions – often being wet and windy. Coupled with acidic and impoverished soil, the difficulty for anything to grow in this area is greatly increased.

In a bid to help shipwrecked survivors, the island was stocked with livestock in the 19th century, resulting in a severe reduction in the population of Megaherbs. In fact, this decline in the population was so drastic that by the late 20th century, the threat of their extinction was of great concern. With the looming threat of losing this magnificent testament to nature’s endurance, all of the introduced livestock were removed by 1993. Thankfully, this act was successful in creating an environment that allowed these Megaherbs to flourish once again.

Campbell Island, the southernmost island of this expedition is, therefore, an example of what can be achieved in island restoration. Another success story of the island is that of the Campbell Teal, whose habitat is the tussock grassland that is dominated by the Megaherbs. Driven to the brink of extinction, 11 of these Endangered teals were taken into captivity and bred before being released back into the wild. Our ABA New Zealand Cruise offers you the opportunity to see both the Megaherbs as well as the teal.

To find out more about this amazing birding tour, click here.